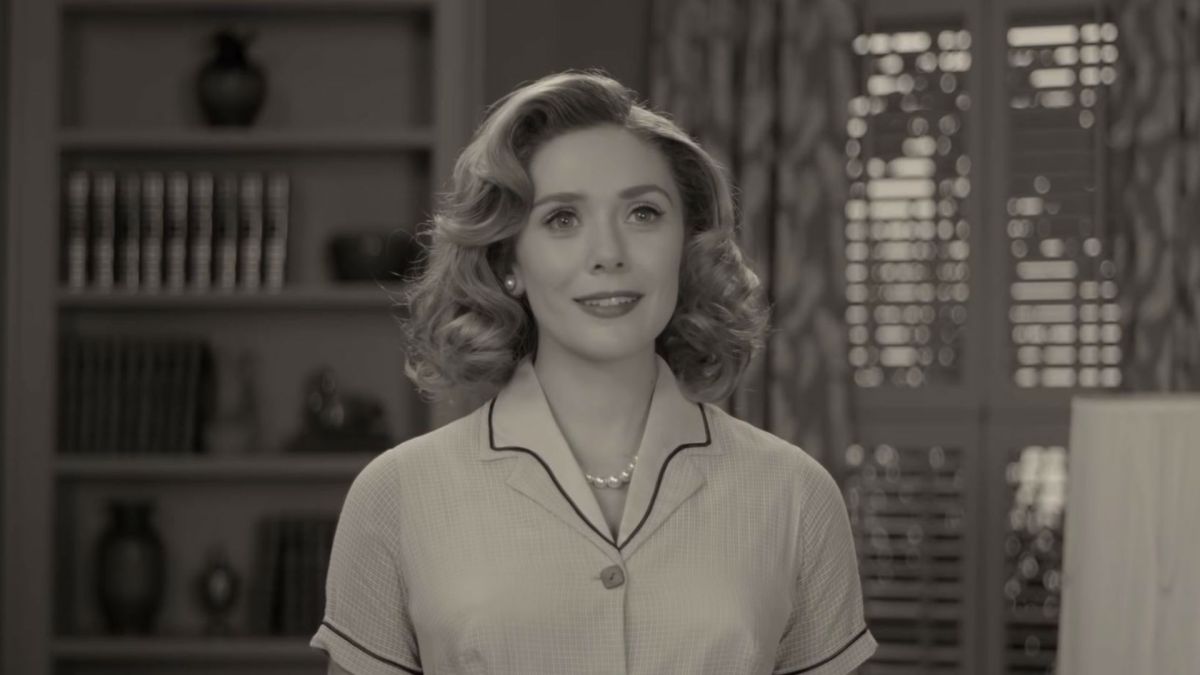 It’s Marvel’s weirdest spin-off yet – WandaVision takes the MCU into uncharted territory on Disney Plus. Featuring the return of Wanda Maximoff (Elizabeth Olsen), the Scarlet Witch, and the Vision (Paul Bettany), the upcoming Marvel TV series will reunite these Avengers – even though one of them is supposed to be dead. WandaVision is going to be an unconventional kind of show.

“It is half classic sitcom and half full MCU spectacular,” explained WandaVision writer Jac Schaeffer at D23. What does that mean, exactly? Well, a recent Super Bowl teaser showcased the classic sitcom side of things a little – it looks like these parts of the show will be used as a prism for exploring out-there stories with the character. This surreal framing device could also explain how Vision is still alive in the show.

WandaVision will also reintroduce a number of supporting characters from the MCU’s greatest hits. Below, you’ll find everything you need to know about the series, including details about the cast, which heroes and villains you can expect, and more.

WandaVision has a confirmed release date of December 2020, it was announced in an investor call – a specific day hasn’t been revealed yet. It’ll release exclusively on Disney Plus. WandaVision began filming in Atlanta, Georgia in late 2019 with set photos teasing one of Wanda’s new looks.

Elizabeth Olsen and Teyonah Parris were spotted on the set of their upcoming Marvel / Disney+ series #WandaVision today – see the photos! https://t.co/caG5YBT1ZtDecember 16, 2019

It’s been confirmed that WandaVision will air as six individual episodes, likely released on a weekly schedule similar to The Mandalorian and The Clone Wars.

There is a WandaVision trailer (kind of)

Our first look at WandaVision came in the teaser trailer above, released at the Super Bowl. It shows Wanda in her Scarlet Witch costume from the comics for the first time. We also see a little more of the sitcom style of the show at work – we catch a ’50s-style black-and-white sequence, and another more ’80s/’90s-looking scene that might remind you of a show like Roseanne, with Vision even dressed up like a sitcom dad.

A full trailer will likely be revealed around Comic Con time in July.

WandaVision’s story: what’s the show about?

It’s the big question – what the heck is WandaVision about? We know for certain that WandaVision will focus on Wanda Maximoff and The Vision, reunited in some form after the events of Avengers: Endgame. But how that happens isn’t exactly clear. The last time we saw Vision, Thanos was ripping the Mind Stone from his head, leaving the synthetic superhero dead.

Well, Marvel has revealed that WandaVision will tie into the upcoming MCU film, Doctor Strange and the Multiverse of Madness, which might offer a clue as to how this story is being told. Marvel’s riff on the notion of alternate universes could mean there will be at least one where The Vision is still alive.

Does that mean WandaVision exists in an entirely different reality altogether? It’s possible, but Wanda has always had reality-altering powers, too – in the comic House of M, she reshaped the entire Marvel Universe so that characters were placed in entirely different situations. It could be that this sitcom reality is one of her own making.

Some details add intrigue to the story. Spotted shooting on location in Atlanta, actress Teyona Paris was seen carrying an ID badge for fictional US government department, SWORD. Marvel fans will be aware of SHIELD already, of course – but SWORD was actually introduced in Avengers director Joss Whedon’s comic Astonishing X-Men, as the outer space-policing opposite to SHIELD.

First pics of Teyonah Parris (aka Adult Monica Rambeau!) on the ser if WandaVision! (Via @JustJared) pic.twitter.com/M8K1qap67lDecember 17, 2019

The story of the upcoming WandaVision TV show remains a bit of a mystery, but series star Elizabeth Olsen has revealed that the show will explain why Wanda becomes known as Scarlet Witch. The series’ suburban setting is inspired visually by the acclaimed Vision comic by Tom King and Gabriel Walta from 2015 – and we’re likely to see Sparky the dog from the comic appear in this series, who’s like the Vision version of a pet.

“We have him in the suburbs. You may meet Sparky the dog in the series. It’s only just inspired by that series, but goes on a different direction, based on where we are after Endgame with the MCU.”Kevin Feige on Tom King’s Vision run being adapted in WandaVision. pic.twitter.com/JR9FXenhhBDecember 7, 2019

The WandaVision cast features heroes from across the MCU

Obviously WandaVision will see the return of Elizabeth Olsen as the Scarlet Witch and Paul Bettany as The Vision, but they’ll be joined by some other familiar names from across the Marvel Cinematic Universe.

Kat Dennings will return as wisecracking political science major Darcy Lewis from the Thor movies. Randall Park is also back in the role of FBI agent Jimmy Woo from Ant-Man and the Wasp – he was a highlight of an otherwise lesser entry in the MCU canon. Both have deep sitcom backgrounds, which might explain why they’re a good fit for this show.

Joining them is another familiar character – but the last time we saw them in a previous Marvel movie, they were a lot younger.

Teyonah Parris has been cast as Monica Rambeau – that’s the daughter of Carol Danvers’s best friend Maria Rambeau in the movie, Captain Marvel. This time around, she’s an adult and working for the aforementioned government agency, SWORD.

Matt Shakman (It’s Always Sunny in Philadelphia and Fargo) will be bringing his comedy touch to the show as director, while Black Widow’s Jac Shaeffer is WandaVision’s lead writer.

WandaVision has opted for a genre-smashing combination of sitcom style with classic Marvel superhero tales. In fact, the show’s official poster even forgoes the usual sleek Marvel visuals in favour of a classic 1950s sitcom style, bringing to mind classic shows such as Bewitched and I Dream of Jeannie.

But it seems it’s not quite as simple as that.

“Having the opportunity to tell more of their story, to see more of what Wanda can do, more of what makes Vision Vision, and – most importantly – reveal a name that I’m not even sure we’ve said in the MCU yet, but we absolutely make a big deal of in the show, which is that Wanda is in fact the Scarlet Witch,” said Marvel boss Kevin Feige in a recent interview.

“What does that mean, that she is the Scarlet Witch? And that’s what we play into in this show, in ways that are entirely fun, entirely funny, somewhat scary, and will have repercussions for the entire future Phase 4 of the MCU.” Another reason to stay subscribed to Disney Plus, then.