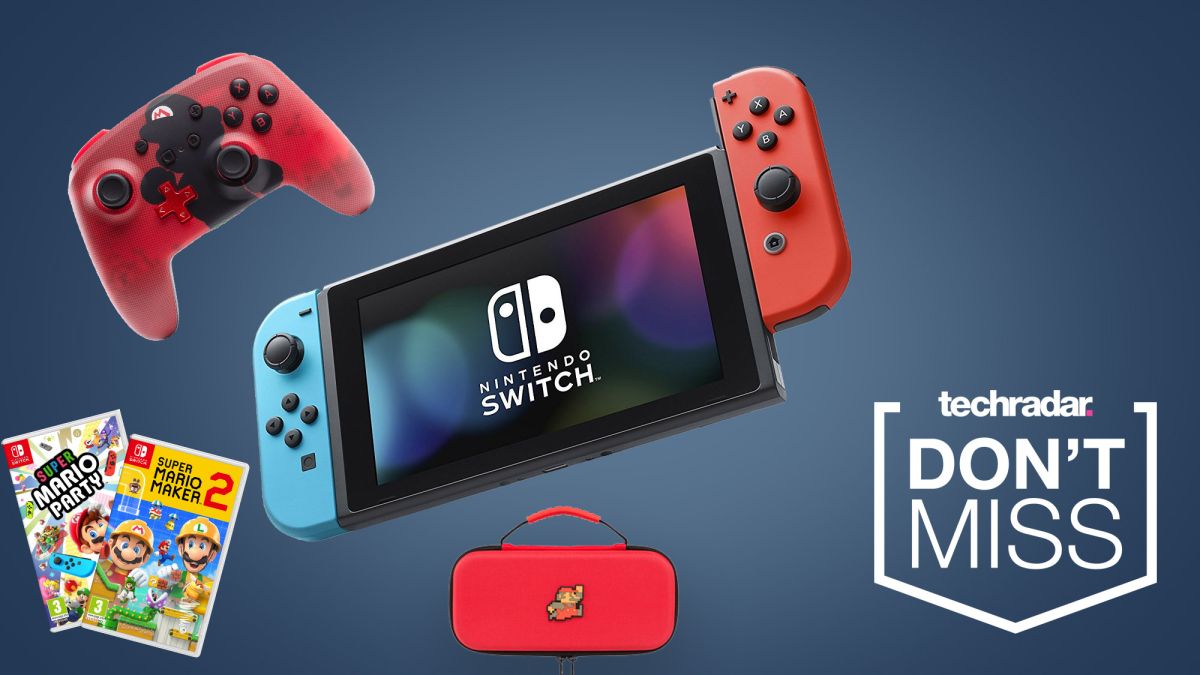 Get your Goomba-stomping boots ready and dust off your blue dungarees, Mario Day is on its way! To celebrate upcoming March 10th (aka Mar10 – get it?), Walmart are holding a massive Nintendo Switch deals event, offering sales on console bundles, games, and handy accessories to get you on your way to Mushroom Kingdom for less.

Take advantage of these sweet Nintendo Switch deals while you can and save on the console itself as well as a range of cheap controllers and Mario games! Games include Super Mario Party, Super Mario Maker 2, and Mario & Sonic at the Olympic Games Tokyo 2020, and they’re all down to just $39.99 in Walmart’s Mario Day sale. Plus, you can add to the savings with PowerA’s range of Nintendo Switch accessories, spanning retro-style controllers to sturdy carry cases with screen protectors included.

But what about the main event? Well, you can also pick up this $269 Nintendo Switch and extra controller bundle, the only thing is this bundle is still showing as out of stock. That means you’ll either have to keep checking back to see if any new consoles have come into the warehouse, or pick up a $299 Nintendo Switch from Walmart. Nintendo Switch bundles are in short supply in the US at the moment as retailers run in and out of stock faster than a golden mushroom so you might have to be quick to secure your saving today.

We’re more than happy to be celebrating Mario Day with some excellent Nintendo Switch deals from Walmart, but you might have to be quick to pick up those high-value items.

Nintendo Switch Red & Blue console | PowerA wired controller | $269 at Walmart
This bundle is currently out of stock at Walmart, but keep checking back to be the first to grab one. This Nintendo Switch deal adds a Mario themed PowerA wired controller into the mix for less than standard console price! That’s a fantastic deal offering up instant multiplayer action as soon as you crack into the box.
If this bundle is still out of stock, you can still pick up a $299 Nintendo Switch from Walmart. View Deal

Super Mario Party – Nintendo Switch | $39.99 at Walmart
Jump into minigame mayhem with Super Mario Party – the friendly cartoon virtual board game with the power to destroy friendships and familial ties. Plus, you can save $20 on all that carnage at Walmart this week.
View Deal

Mario & Sonic at the Olympic Games: Tokyo 2020 | $38.99 at Walmart
Can’t wait for the Tokyo 2020? Mario teams up with Sonic in the latest instalment of the pair’s Olympic sports escapades. Perfect for multiplayer fun, this is a fantastic $20 reduction in Walmart’s Nintendo Switch deals.

PowerA Enhanced Wireless Controller | $34.99 at Walmart
Or, check out this bold red Nintendo Switch controller, featuring a silhouette of Mario straight down the middle. There’s also a mesh-like design over the entire body of this particular controller for extra intrigue.
View Deal

PowerA Stealth Case for Nintendo Switch | $9.99 at Walmart
This PowerA case offers up a fantastic retro design on a sturdy storage solution. Plus, you’re even picking up a screen protector and a microfiber cleaning cloth for full protection.
View Deal

PowerA Red Mario Nintendo Switch case | $9.99 at Walmart
You’re not saving much with this Nintendo Switch deal, but you are picking up an excellent PowerA case for under $10. That’s a great shout if you’re picking up a new console for Mario Day, so you can get protected straight away.
View Deal