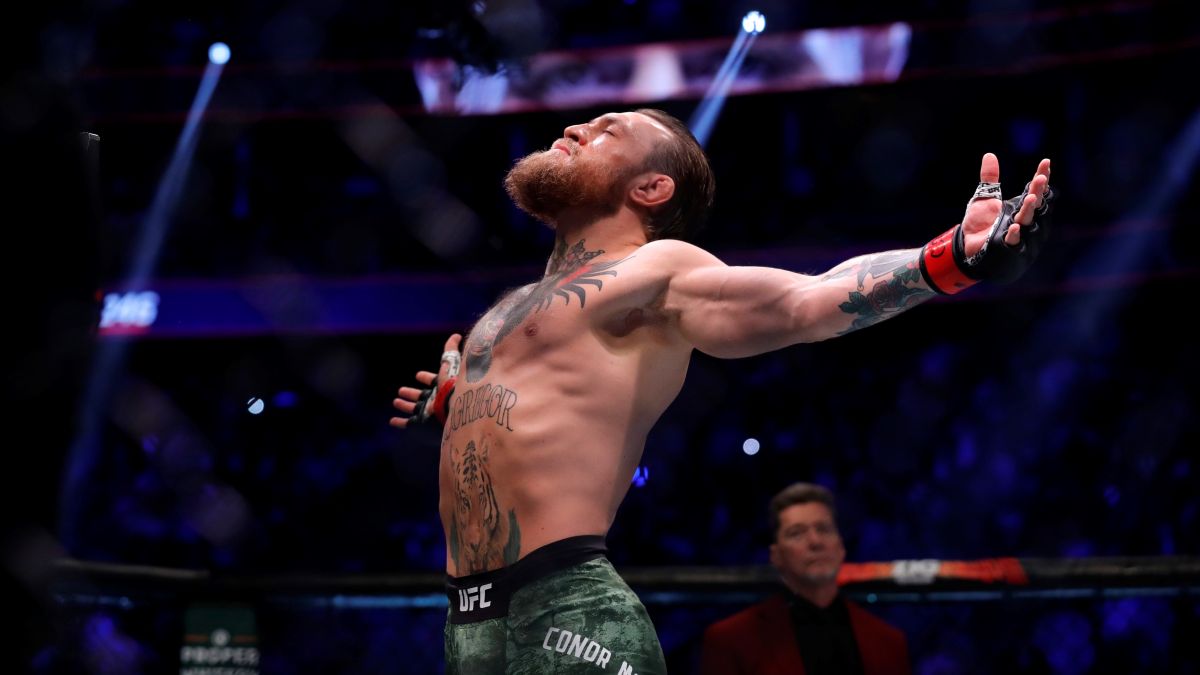 UFC, or the Ultimate Fighting Championship in full, is the world’s premier mixed martial arts (MMA) promotion, with stars like Conor McGregor, Jon Jones, and Holly Holm some of the biggest draws in all of sports. The often vicious and always unpredictable nature of MMA fights mean that title belts change hands regularly – but follow our guide and you’ll see just how easy it is to find a reliable UFC live stream online and never miss a second of Octagon action ever again. Whether you’re a dedicated UFC Fight Night fan or just tune in for the big cards, here’s how to watch UFC events wherever you are.

Totally new to UFC? Welcome to a seriously addictive sport! As a primer, all you need to know is that UFC Fight Nights take place every week at venues all over the world, while the big ticket ‘numbered’ fights are held monthly – usually in the US. The next of these is UFC 249 and it features one of 2020’s most eagerly anticipated Octagon showdowns: Khabib vs Ferguson. For those in the US, a final thing to know is that ESPN+ has exclusive rights to UFC – but its great value UFC Bundle has you covered – and will save you loads.

The biggest UFC fights are reserved for the sport’s ‘numbered’ events. These take place once a month – UFC 249 in April, UFC 250 in May and so on. They’re typically available on a pay-per-view basis and held at big name venues in the US.

On top of that, a second-tier of events exist called UFC Fight Nights. These are held on a weekly basis and occur all over the globe, usually featuring up-and-coming local fighters. They’re still a darn big deal, though – Fight Night 171 is at London’s cavernous O2 Arena and tickets cost hundreds of British pounds just for the nosebleeds. And UFC Fight Night 170, scheduled for March 15 in Brazil and featuring Lee v Oliveira as its main event, is another great example of how fast the sport is growing – though it will be now be held behind closed doors due to the coronavirus outbreak.

Both types of UFC events are shown exclusively on the ESPN+ streaming service in the US and almost always take place on Saturdays. There’s also a third series of Octagon bashes called ‘UFC on ESPN’ – these occur intermittently and air on one of ESPN’s TV channels in America. For the events that matter most, follow our guide and find out the best ways to watch a UFC live stream wherever you are.

Below, we’ll talk all your options for live streaming UFC Fight Night events and PPV cards in a number of countries where MMA is particularly popular. Already watch UFC religiously but worried about being out of the country for the next big fight? Don’t sweat it. By taking advantage of a VPN service, you can tune in to the entire UFC schedule no matter where you are in the world. And best of all, it’s really easy to do.

That’s thanks to a clever bit of software called a VPN, or Virtual Private Network. It allows you to tweak your IP address to one that’s based back in your home country, so you can access all the streaming services you normally would. We’ve tested hundreds of VPNs and can recommend ExpressVPN, which comes with a 30 day money back guarantee), as the #1 rated best VPN in the world right now. You can watch on many devices at once including Smart TVs, Fire TV Stick, PC, Mac, iPhone, Android phone, iPads, tablets etc. Check out ExpressVPN and get 3 months FREE with an annual plan.

Octagon veterans in the US may already know that ESPN+ has the exclusive rights to all of the UFC fights around – from Fight Nights to the big pay-per-views.

That means it’s your one and only place to watch UFC this year. How much it costs you will depend on what you want to watch, but the best value for UFC fans is clearly the streaming service’s UFC Bundle. We know this sounds like a lot, but then it gets you a lot.

As well live streaming access to UFC 249, which features the fight of the year in Khabib vs Ferguson, you get an annual subscription to ESPN+. That’s worth $50 on its own and means you’ll also be able to live stream UFC Fight Night every week, as well as all the other great sports ESPN has to offer – including live MLB, NHL, MLS, Serie A, and FA Cup games.

There’s also plenty of added value content for UFC fans, like Dana White’s Contender Series, UFC Destined, and Ariel & The Bad Guy, plus the ability to watch classic fights and replays. The superb value of this package is underlined by the fact that buying the last UFC pay-per-view outright cost $64.99 for existing ESPN+ subscribers.

And don’t worry if you want to watch UFC but are going to be outside the US when certain fights are on. As per our guide above, you just use a VPN to watch UFC just like you would from your home state.

How to watch a UFC live stream in the UK

In the UK and Ireland, BT Sport has exclusive broadcast rights to UFC events. The good news for subscribers is that every UFC Fight Night is shown on BT Sport as standard – check your TV listings before each event for the exact channel, but it’s often BT Sport 2 based on our experience.

The even better news is that those ‘numbered’ UFC events we’ve talked about are increasingly being shown on BT Sport at no extra cost – while in the rest of the world they remain pricey PPV-only offerings. It was the case with UFC 248 and the welcome trend is expected to continue with UFC 249.

Timings vary, especially for UFC Fight Night events as they’re held all over the world, but big cards like the upcoming UFC 249 will generally see coverage start at around 11pm GMT on the relevant Saturday, with the main fights getting underway at around 3am early on the Sunday morning.

The broadcaster’s coverage of UFC is available via the BT Sport app and on its website, so you can live stream UFC on most devices these days – and don’t forget that you can now get BT Sport without a massive commitment. The new £25 Monthly Pass is simply superb value for access to all the big UFC fights, when you consider that those in the States can end up coughing up around $65 for a single event.

How to live stream UFC in Australia

Streaming service Kayo Sports is ESPN’s partner in Australia and this means there’s heaps of UFC content available on its fantastic value packages. Basic costs just $25 a month and lets you stream on two screens, while Premium is a mere $35 a month for simultaneous viewing on up to three devices. The multi-screen support means that you can effectively split the price of a monthly subscription between friends or family members, and it breaks down at a very tasty per-person cost – Kayo Sports Premium representing the best value.

Kayo also lets you watch a load of other great sports, not least offering an NRL live stream for every match of the 2020 season. There’s even a free 14-day Kayo Sports trial on offer, so you can check it out for yourself without committing a penny, and its app works across PCs, Macs, smartphones, tablets, select smart TVs and more – console support is the only obvious outlier but it’s said to be “coming soon”.

On TV, Foxtel Sports is where Aussie UFC fans should look for Fight Night action – you’ll need the network’s Sports Package, but Foxtel subscribers benefit from access to the Foxtel Now streaming app.

Watching UFC pay-per-view events is another matter. Kayo shows some undercard fights but to watch a full main event like UFC 249, you’ll have to cough up a few bob. On TV, you can buy these fights via Foxtel Main Event – or live stream them with UFC Fight Pass. Expect these fights to cost around $54.95 whatever option you choose, with the main card of numbered events generally starting around 4pm AEDT.

Remember that if you subscribe to a streaming service for UFC coverage but find yourself outside the country for the fight you want to watch, just grab a VPN to take in the action as usual.

Canadian fight fans also have a few options for watching UFC on TV and online. In the main, big cards like UFC 249 will be pay-per-view events on TV and should be offered by most major cable providers, including the likes of Bell, Rogers, Shaw, Telus, Eastlink – expect to pay around $64.99 for the privilege.

To live stream UFC’s biggest events, your safest bet is therefore likely to be UFC Fight Pass, as it is in other countries. Expect similar pricing to TV pay-per-view costs. Beyond that, UFC Fight Nights are a lot cheaper and easier to find. Generally, they’re shown on TSN (The Sports Network), which offers streaming-only access from $4.99 a day or $19.99 a month.

If you usually watch UFC using one of these services, remember to check out ExpressVPN as it will allow you to live stream all the big rights and events even if you’re not in Canada at the time.

UFC live stream in New Zealand: how to watch every event

Fans based in New Zealand can catch the major UFC events on Sky Arena. Similar to most other streaming platforms, you will have to cough up for the PPV, costing $39.95.

Big UFC fans wanting to watch Fight Night events as well will find that a UFC Fight Pass is the best option to tune in to MMA action weekly.

Remember that you can download a VPN to watch UFC fights online from abroad with the streaming service or TV channel your normally would use (and undoubtedly pay for) at home.