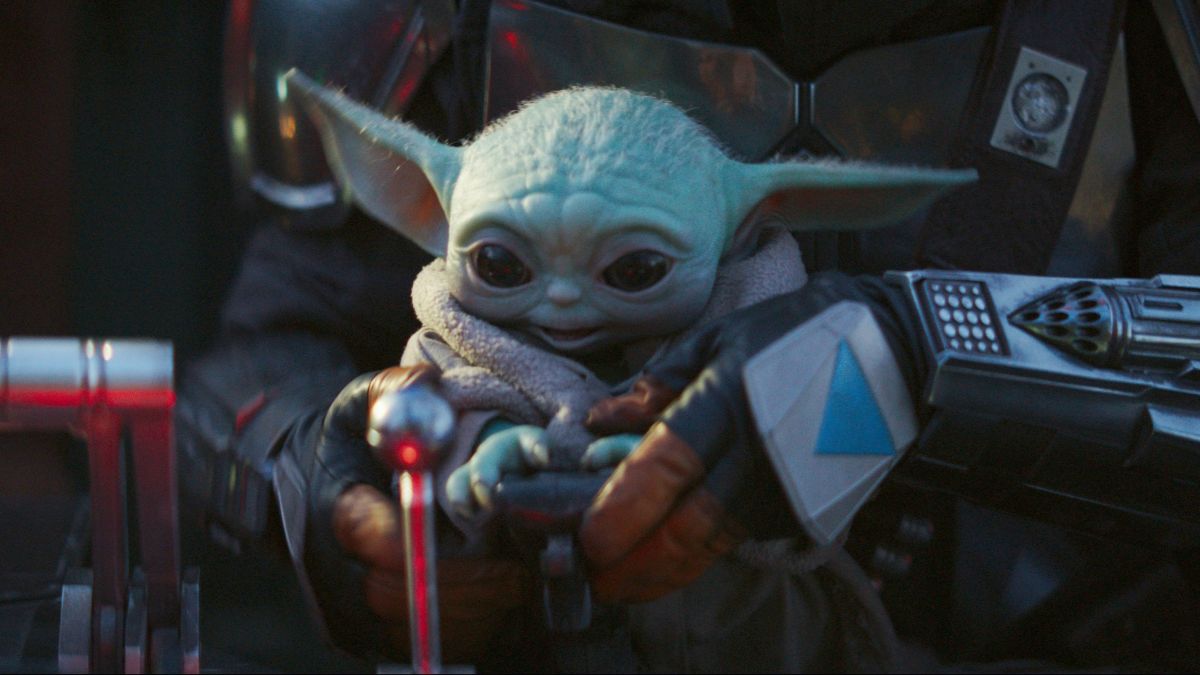 We can’t think of a Disney Plus show we’re looking forward to more than The Mandalorian season 2. The Star Wars saga has had its ups, and its downs (cough, Rise of Skywalker, cough) for sure, but season 1 of the highly anticipated show certainly established itself as the former. It won’t be long before Baby Yoda, and a fresh stream of memes, will be back: filming has already finished.

Speaking of the diminutive green jedi, The Mandalorian season 2 will likely focus on the search for his homeworld, as the finale to season 1 suggests. We’ll also see “major, major, epic, epic lightsaber action” according to Giancarlo Esposito, who’ll return as the Darksaber-wielding Moff Gideon. We may also see Skywalker characters, if the rumors floating around bear fruit.

Here’s everything we know about The Mandalorian season 2, including the release date, story, and what we know about the Darksaber. We’ll also discuss the potential spin-offs being prepped for the smash hit Star Wars TV show.

The Mandalorian season 2 officially has a release date of October 2020, which Disney confirmed in its earnings report in February.

Season 2 was already in the works when season 1 started releasing on Disney Plus – confirmation of a second season came from creator Jon Favreau after just one episode was released.

Favreau revealed a little more on Friday December 27, with a tweet confirming that the new season would be coming in Fall 2020. Only later was the specific month of October revealed by Disney.

Now, filming on season 2 appears to have wrapped as of March 2020, based on this Instagram post from star Gina Carano:

The Mandalorian season 2 story: the search for Baby Yoda’s homeworld and Darksaber action

George Lucas had a rule that Jedi Master Yoda’s species and home planet weren’t to be disclosed, back when he was in charge of Star Wars.Now that Disney is in charge of Lucasfilm and Star Wars, though, it’s likely that this has changed, as everything suggest The Mandalorian season 2 will focus on the search for “the Child” – aka Baby Yoda’s – home.

During the season 1 finale, the Mandalorian Armorer on Nevarro tells the Mandalorian (real name Din Djarin) that because Baby Yoda is a foundling (and therefore probably not, as previously speculated, a clone), “By creed it it is in your care.” She then adds that, “You have no choice, you must reunite it with its own kind.”

Unfortunately for Mando, however, the Armorer didn’t have any information on where he might find them: “This you must determine,” she teases.

But as ever in Star Wars, there’s a degree of ambiguity here – and the identity of who the Mandalorian is actually looking for may come down to your own point of view. Perhaps Mando is, as it seems at first glance, looking for the homeworld of Yoda’s species. Or maybe he’s simply looking for Jedi who survived the Emperor’s Order 66 purge in Revenge of the Sith, some three decades earlier.

Why the confusion? In the Outer Rim worlds that provide the setting for The Mandalorian, the Force exploits of the Jedi are just myth – indeed, the Mandalorian simply says of Baby Yoda’s Force abilities that “it can move objects with its mind”.

“I know of such things,” the Armorer reveals. “The songs of aeons past tell of battles between Mandalore the Great and an order of sorcerers called Jedi that fought with such powers.” Crucially, when Mando asks if Baby Yoda is an enemy, the Armorer states: “Its kind were enemies but this individual is not.”

So seeing as Mandalore’s battles were with the Jedi, rather than specifically with Yoda’s species, this implies that Mando’s new bounty may actually be the Jedi…

Or maybe the Mandalorian will settle for simply finding out Baby Yoda’s name. Apparently he has one, and Disney CEO Bob Iger told The Star Wars Show that he knows what it is – not that he’s giving anything away. Speculation over Yoda’s name continues.

Of course, we’ll see more of Moff Gideon in season 2 of The Mandalorian, probably looking for revenge after the battle at the end of season 1. “Major, major, epic, epic lightsaber action happening on this show,” the actor said at Fan Expo Canada (via Comic Book). Whoever Gideon is fighting with the Darksaber, though, won’t be Mando or (heaven forbid) Baby Yoda. Either way, this means we’ll see another character wielding a lightsaber in season 2.

The Mandalorian season 2: spin-offs may be in the works

The exact phrasing suggests spin-offs will focus on newer characters, rather than existing ones. We’re sure a lot of fans would argue Gina Carano’s Cara Dune would be a good fit…

One actor rumored for a role in season 2 is WWE star Sasha Banks. Who she’d be playing, though, is yet to be confirmed.

The Mandalorian season 2: the Darksaber explained

Above: clips from The Clone Wars featuring the Darksaber.

When Moff Gideon cuts himself out of his stricken TIE Fighter at the end of The Mandalorian season 1 finale, he uses a blade that sounds much like a lightsaber, but looks rather different to the weapons we’re used to seeing in the hands of Jedi and Sith. More sword-like in shape, with a black blade surrounded by a bright glow, it should, however, be familiar to viewers of Star Wars: The Clone Wars and Star Wars Rebels. Because unless we’re very much mistaken, this looks like the legendary Darksaber.

This unique weapon is a key part of Star Wars – and particularly Mandalorian – lore. Originally created by Tarre Vizsla, the first Mandalorian warrior to join the Jedi order, it became a symbol of power on the planet of Mandalore. At the conclusion of Star Wars Rebels (set two years before the events of Star Wars: A New Hope) it ended up in the hands of Bo-Katan Kryze, who was deemed the rightful heir to the Mandalorian leadership.

But how did such an important weapon end up in Moff Gideon’s hands? We do know that at some point between the end of Rebels and Return of the Jedi, the Empire carried out the so-called “Great Purge”, all but wiping out the Mandalorians. We also know that Gideon was an officer in the Imperial Security Bureau (ISB) during the Purge, so could have obtained the Darksaber from Bo-Katan at that time. (If that does turn out to be the case, it’ll be intriguing to find out if Bo-Katan survived – she was played by Battlestar Galactica’s Katee Sackhoff in both The Clone Wars and Rebels, so this could be a chance to get a fan-favorite actor into the show.)

Alternatively, the Darksaber could have been in the possession of the Mandalorian “Tribe” living underground on Nevarro throughout The Mandalorian season 1 –Gideon may simply have obtained it when his Imperial remnant wiped out most of the Mandalorians in hiding. This seems less likely, however – surely the surviving Armorer would have protected such an important weapon with her life.

The Mandalorian season 2: Jon Favreau will direct an episode

Despite being the creator and main writer of The Mandalorian season one, Iron Man director Jon Favreau didn’t direct a single episode – it didn’t hurt the show at all, but season 2 will benefit from his input. “I didn’t get a chance the last time around because I was doing Lion King,” Favreau mentioned to EW. “So I’ll step in for one of them.”

George Lucas has been on the show’s set, too, resulting in this amazing photo:

What’s more, it’s rumored that Peyton Reed (Ant-Man, Yes Man) will direct two episodes. This comes from Charles Murphy, but he admits that he has no secondary source to corroborate his information. Another rumor doing the rounds in February 2020 contended that James Mangold (Walk the Line, The Wolverine), but Mangold later debunked them.

According to Deadline, “Insiders have hinted that several established characters from the Skywalker saga’s feature films mythology will make appearances during the show’s sophomore season.” Jon Favreau’s release date tweet above showed a picture of a Gamorrean, one of the so-called Pig Guards from Jabba’s Palace in Return of the Jedi, but we suspect that – if this insider’s rumors are accurate – they’re referring to someone who’s a significantly bigger deal in the saga than that.

While Jabba the Hutt, Darth Vader and the Emperor are dead (or so the galaxy believes…) and Luke Skywalker is unlikely to crop up away from the saga that bears his name, there are plenty of big names in the Star Wars universe who’ll be operating around the time of The Mandalorian. It’s set five years after the destruction of the second Death Star in Return of the Jedi, after all. Original trilogy survivors Han Solo, Princess Leia, Chewbacca, Lando Calrissian, C-3PO, R2-D2, and even Rebel legends Wedge Antilles, Admiral Ackbar and Nien Nunb could all cross paths with the Mandalorian and Baby Yoda.

But we’d be much more interested to see General Hux’s dad, Brendol – a former Imperial officer who was instrumental in the formation of the First Order – or even (SPOILER ALERT) Rey’s parents. Now that we know they lived in hiding – pretending to be “nobody” before giving Rey away – any new glimpses at their backstory could enhance what we learned in The Rise of Skywalker.

Perhaps most likely, however, is the reappearance of various bounty hunters hired by Darth Vader to capture the Millennium Falcon in The Empire Strikes Back. IG-88, Zuckuss, Dengar, Bossk and 4-LOM are still theoretically looking for work in the time of The Mandalorian season 2, and definitely operate in the same hives of scum and villainy as our friendly neighborhood Mando.

Maybe we’ll even see a return for the legendary Boba Fett… Yes, he was last seen being swallowed by the Sarlacc in Return of the Jedi, but the bounty hunter did manage to escape 1000 years of digestion in the old Expanded Universe “Legends” stories, a plot that could be ported over into official canon. And there’s also been plenty of speculation online that the mysterious figure on Tatooine who finds the body of the deceased Fennec Shand in Chapter 5, “The Gunslinger”, may be Fett himself – the jangling spurs might just be a clue…

And even if the owner of the spurs isn’t Fett, one particularly interesting theory suggested on Inverse suggests it could be a member of the family – Ailyn Vel, his daughter in the Legends stories. Could this be the identity of this mysterious Funko Pop! Vinyl figure?

The Mandalorian is the best slice of Star Wars in years

We can’t wait for a second season of The Mandalorian. A couple of less thrilling episodes in the middle of season one aside, the simple storytelling and stylish imagery of this show made it a satisfying glimpse at a different side of the Star Wars universe. Creator Jon Favreau has plenty on the table to pay off in season 2.