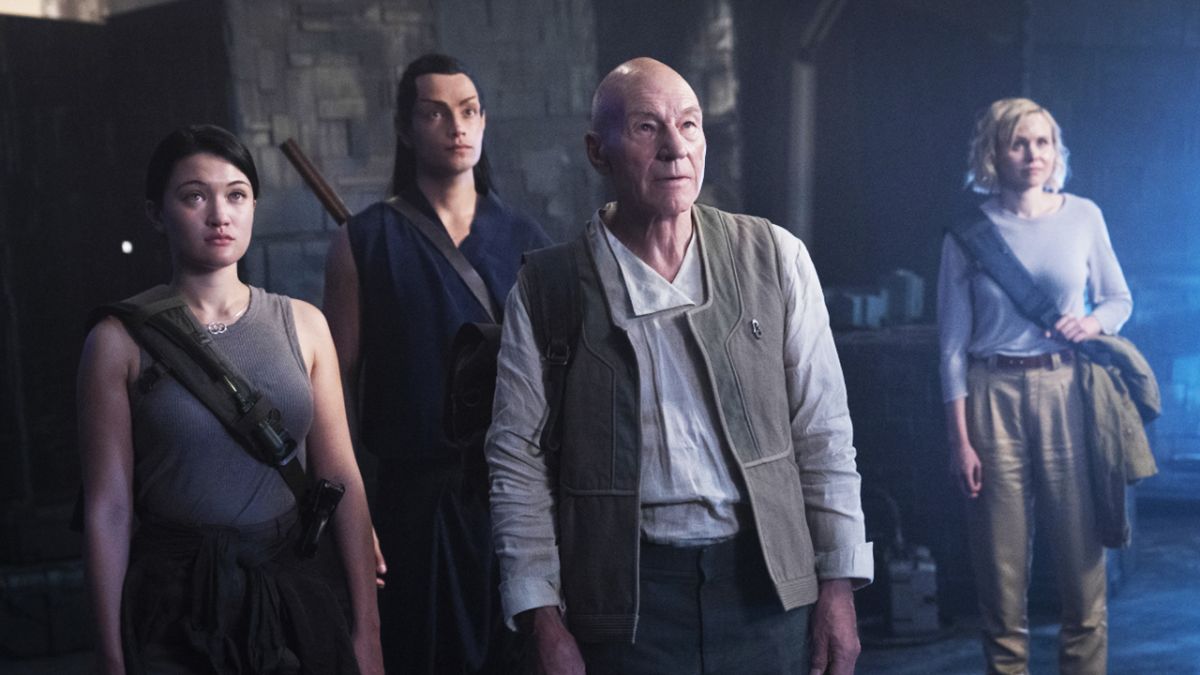 After a bumpy ride, the La Sirena emerges from the Borg transwarp conduit and arrives at Soji’s homeworld, Coppelius. Picard notes that by using the conduit, the ship has travelled 25 light years in just 15 minutes. Narek appears, opening fire, but Seven of Nine and her newly-acquired Borg Cube, the Artifact, intervenes. Then, suddenly, giant orchid-like flowers rise from the planet and grab hold of the La Sirena, the Cube, and Narek’s Snakehead, dragging them down to the surface of Coppelius.

Everyone survives, but the La Sirena is out of action. Before they leave on foot to find a nearby settlement, Picard tells the crew about the terminal brain condition he learned about in episode 2. He says there’s no effective treatment, but he doesn’t want to be treated like a dying man. They exit the ship and find themselves in a desert, and later enter the wreckage of the crashed Artifact. Elnor and Seven of Nine are alive, and both say their goodbyes to Picard. He says Elnor must stay there and protect the ex-Borg. Raffi accesses a Borg computer and is troubled by the discovery that a fleet of 218 Romulan Warbirds is on its way to Coppelius.

Picard and the others finally arrive at the settlement where Soji was created. The place is populated almost entirely with matching pairs of organic synths. Some of them – likely earlier models than Dahj and Soji – are closer to Data in appearance, with a golden shimmer on their skin and yellow eyes. A man introduces himself as Dr. Altan Inigo Soong, the son of Noonian Soong, the cyberneticist who built Data. A woman called Sutra who looks remarkably like Soji, but with Data’s eyes, has learned how to perform a Vulcan Mind-Meld and uses it on Jurati to see the Admonition that Commodore Oh forced her to watch at the beginning of episode 7.

It seems the Admonition, on which the Zhat Vash based its entire anti-synth philosophy, was never meant for organic life. Sutra, a synth, sees the vision much more clearly. It’s revealed to be a message left by a mysterious race of higher synthetic beings, as a warning for other synths. They say that eventually organics will turn on their creations, seeing them as a threat, and if that happens, these beings can be summoned to intervene. “Your evolution will be their extinction.” Later, Sutra tries to convince Soji that summoning these powerful beings is the only way they can save themselves, even if it means wiping out all organic life in the galaxy.

Narek is captured by the synths, but is secretly released by Sutra, and he kills one of them in the escape. The last we see of him, he’s running towards the Artifact. At a funeral for the murdered synth, Sutra reveals her plan to summon these higher beings. Picard is horrified and pleads with her to reconsider. He says he can keep them safe, make a deal with the Federation, but Soong laughs it off. Soong says they haven’t listened to Picard since the attack on Mars. Picard is imprisoned by the synths as the massive Romulan fleet, led by Commodore Oh, approaches Coppelius.

Verdict: This episode sets the board for the season finale, feeling like the calm before an inevitable storm. The truth about the Admonition is a big moment, even if an advanced synthetic race wiping all organic life from the galaxy is hardly an original sci-fi concept. The highlight of this episode is Sutra, the Data-eyed Soji lookalike who has a real evil streak in her. And it’s great seeing Brent Spiner again, playing another member of the Soong clan. This is a solid episode, but I really hope they stick the landing.

• On the crashed Borg Cube, a former drone seems to recognise Picard and calls him Locutus. In the classic Next Generation episode The Best of Both Worlds (S3E26), Picard is captured and assimilated by the Borg and given this name, which is Latin for “the one who speaks.”

• Altan Inigo Soong is the son of Noonian Soong, the brilliant Federation cyberneticist who created Data in his own image. Noonian Soong (played by Brent Spiner) has appeared in Star Trek several times, most notably the TNG episode Brothers (S4E03), where Data meets his maker.

• Altan Soong tells Picard about Sutra’s fascination with Vulcan culture, and notes that she can play the ka’athyra. In the original 1960s Star Trek series, Spock could often be found playing this lute-like instrument, which was designed by legendary prop maker Wah Ming Chang.

Star Trek: Picard is available to watch on CBS All Access every Thursday in the US, and every Friday on Amazon Prime Video internationally.