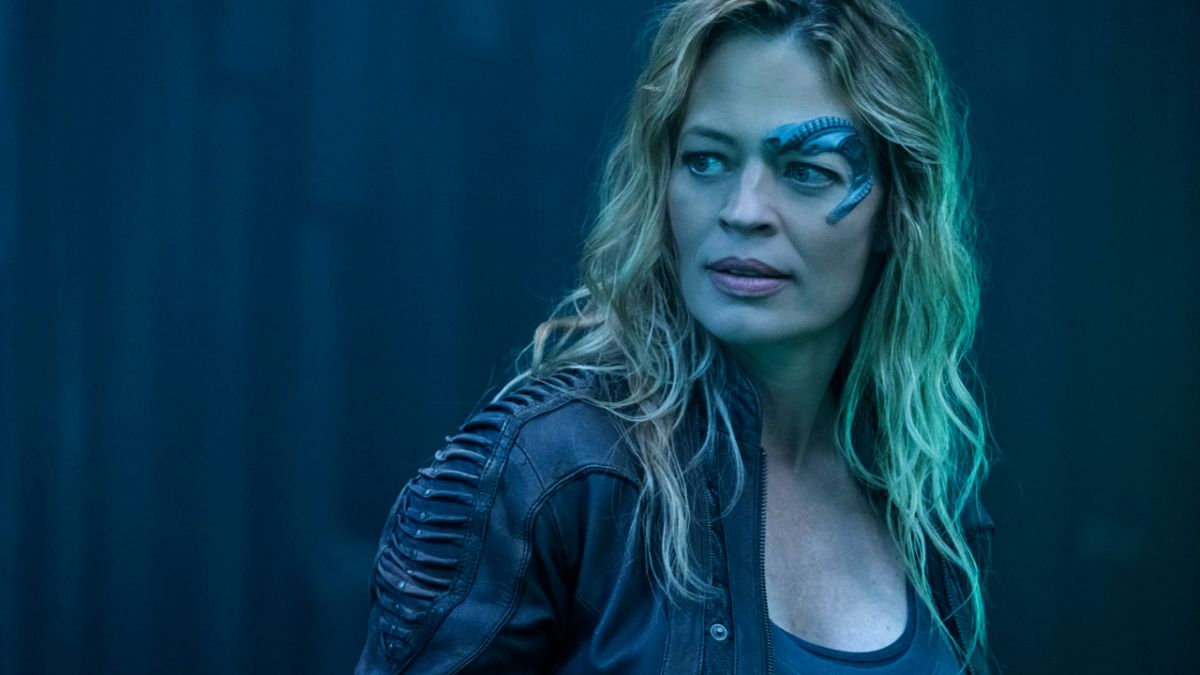 On Aia, a planet with eight suns, a group of hooded Zhat Vash – including Oh, Rizzo, and Ramdha – take part in a ritual. They touch an artifact, the Admonition, which gives them apocalyptic visions. They say it’s a warning from a long extinct race about the perils of developing synthetic life. The visions drive some of the group to suicide. On the Borg Cube, Rizzo talks to a comatose Ramdha, who was apparently driven mad by the ritual. We also learn that she took Rizzo and her brother Narek in when their parents died. Elsewhere on the Cube, Elnor is overwhelmed by Romulans, but Seven of Nine appears and kills them before they can finish the job.

The crew of the La Sirena learns that Jurati had been implanted with a tracker, and had injected a hydrogen compound to neutralize it. The ship’s EMH also informs them that she killed Maddox by disabling his life support. Picard asks Admiral Clancy for help, and she agrees to send a squadron to a nearby starbase, Deep Space 12. While on the Cube, Raffi noticed a symbol being drawn by the Romulans. The ship’s Emergency Navigation Hologram thinks it could be an octonary star system; a planetary system with eight component stars. Raffi wonders if this is the Conclave of Eight, a term she heard while trying to find out who attacked Mars. On the Borg Cube, Seven of Nine activates its regeneration systems, and we see swarms of mechanical insects repairing the broken sections of the destroyed ship.

Soji and Picard talk about Data over dinner. Picard says he was brave, curious, gentle, and unclouded by bias or habit, with a child’s wisdom. He made the crew of the Enterprise laugh, except when he was trying to get them to laugh. Soji seems reassured by this, realizing that being synthetic doesn’t mean she’s worthless. Raffi learns from the La Sirena’s engineering hologram that the chances of an octonary system forming naturally are basically zero, implying that if this place exists, it would have been created to draw attention to itself. In his quarters, Rios looks through a box of memories including his old Starfleet uniform, a photo of an older man, and a drawing of himself and someone who looks a lot like Soji.

On the Cube, Seven of Nine tells Elnor that she might be able to take control of the drones in stasis and create a micro-collective, turning them against the Romulans. On the La Sirena, Raffi gathers the holograms and asks them why Rios has sealed himself away in his quarters. They reveal that something happened on his old Federation ship, the USS Ibn Majid, but that it’s been marked as classified. In sickbay, Jurati wakes up and confesses to killing Maddox and working for Oh. She tries to tell Picard about the visions Oh showed her, but says a psychic block has been placed on her. She tells Picard about Seb-Cheneb, the Destroyer, and says Hell is coming.

Rios opens up to Raffi about what’s been troubling him. When he was serving on the Ibn Majid, his ship encountered two beings in a ship: one called Beautiful Flower, and one called Jana, who looked exactly like Soji. But as first contact was being initiated, the captain – the older man in Rios’s photo – was ordered by Starfleet to kill them. They were synths, and the person who gave the order was Oh. On the Cube, Seven of Nine wakes the sleeping Borg drones up, but Rizzo responds by opening an airlock and blowing them out into space. On the La Sirena, Raffi, having figured out what the Zhat Vash are and believe, and how Oh infiltrated Starfleet, tells the crew. She confirms the Romulans were behind the attack on Mars, which was staged to justify a galaxy-wide ban on synthetic life.

A Romulan fleet gathers near the Cube, beaming Rizzo away and warping to Soji’s homeworld, the location of which they learned through her dream. Picard reassures Rios that his captain was a good man, and was betrayed by Starfleet. Soji, whose memories are flooding back, uses the Borg’s transwarp conduit network to go to the same planet the Romulans are racing towards. She wonders if the Zhat Vash are right, and she is the Destroyer. Picard says that happened 200,000 centuries ago. The past is written. But they have the tools to change things: positivity and curiosity. The La Sirena enters the warp conduit, with Narek’s ship following close behind.

Verdict: This is perhaps the most revelation-heavy episode of Picard yet, laying out the motivations and history of the Zhat Vash, and what their next move is, in detail. It’s also one that doesn’t give Picard much to do, focusing largely on Raffi, Rios, and his crew of holograms. But Patrick Stewart steals the episode when he fondly remembers his relationship with Data, which is a hugely satisfying moment for Next Generation fans.

• Picard learns that Soji was implanted with a viridium tracker. A version of this device first appeared in the 1991 movie Star Trek IV: The Undiscovered Country. One of them was used by Spock to rescue Kirk and McCoy from a penal colony on the planetoid Rura Penthe.

• Rios has a book in his quarters called Surak and Existentialism. Surak was a legendary Vulcan philosopher, who is mentioned in too many Star Trek episodes to count. In the Enterprise episode Awakening (S4E8), Surak appears to Jonathan Archer in a vision, played by Bruce Gray.

• Picard and Rios briefly talk about a Federation captain, Marta Batanides, who Picard says he went to Starfleet Academy with. This character plays a major role in the TNG episode Tapestry (S6E15), in which the mischievous Q gives Picard a chance to relive his youth and alter his past.

Star Trek: Picard is available to watch on CBS All Access every Thursday in the US, and every Friday on Amazon Prime Video internationally.