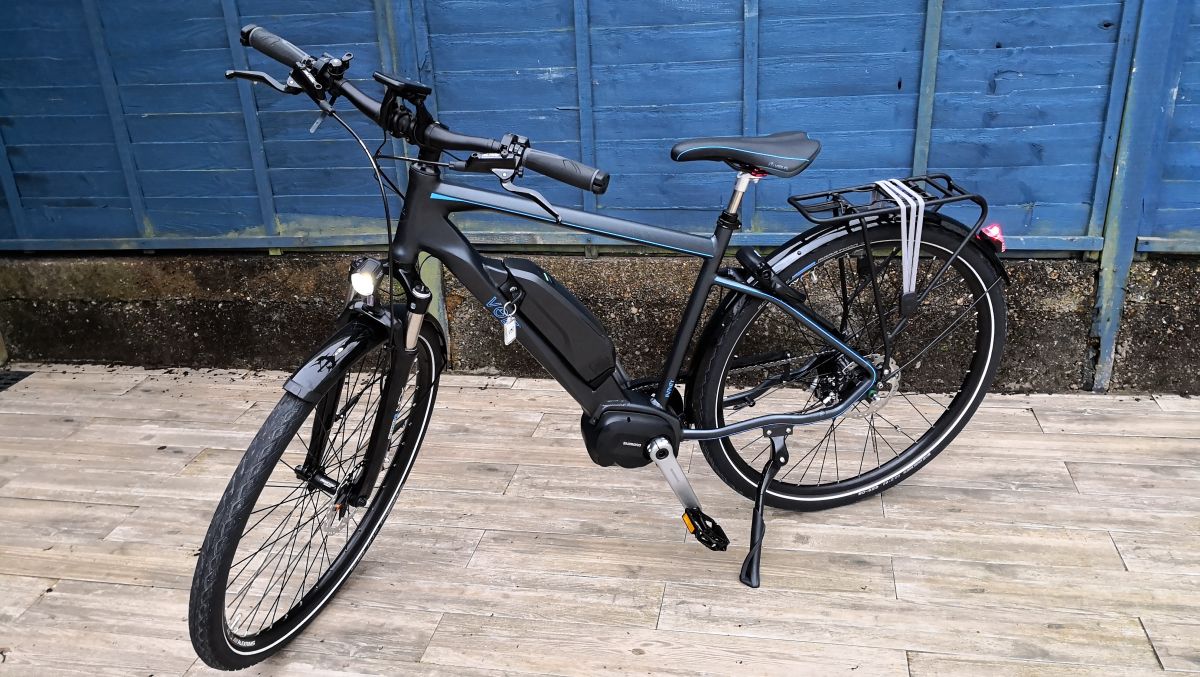 The Infinity does indeed look like a proper bike, and the Volt designers have done a commendable job of making an aesthetically pleasing machine. This is despite the fact that it features the usual frame mounted battery pack and electric motor at the crank combination that defines many e-bike designs.

The company has opted to build the Infinity around two core elements; the Shimano 250W crankdrive motor and its associated Steps operating technology, which delivers 15.5mph or 25kmh tops. It also adapts assistance dynamically, depending on your requirements.

Interestingly, there’s a new LS version of this bike, a two-wheeler that’s a slight variation on the theme of the base Infinity model, but features most of the same components such as 700cc wheels, Schwalbe puncture resistant tyres and SR Suntour NCX suspension.

The all-important battery, meanwhile, is a 36V standard 418Wh lithium-polymer affair from Sony and, in theory at least, delivers up to 70 miles from one charge using the Eco PAS mode. It’s a heady cocktail of quality components.

The biggest difference with the LS though is the step-through frame, which Volt says is smaller and lower than the original. That should make it more appealing to people who’ve found the original incarnation a bit big or don’t like the imposing crossbar.

Either way though, you’ll find the frame is dominated by the chunky battery and the Shimano drive unit at the crank. Without this intelligent power management system however, you’ll find the Volt Infinity a hefty little number.

As is the case with e-bikes, the battery and motor add weight, with the Infinity being 21kg without the battery and 23.65 with the power pack on board. It does feel quite heavy, especially if you’ve got to lift it in and out of a doorway or on to a train for example, even though the frame is actually aluminium.

Easy riding, on the road or off

Nevertheless, start pedaling, relax a bit and the Volt Infinity soon starts to become increasingly enjoyable. The bike features the eight or 11-speed Alfine D12 gear system, which in tandem with the Shimano Steps technology provides effortless automatic shifting. It can also be used manually if you prefer to have more involvement with your bike. Either way, the cycling part of the experience is as good as anything else on the market.

Shimano’s up-down push button located on the left side of the handlebars allows you to manage power assistance and it’s a tried and tested format that works well. An additional benefit of this when you’re not cruising is that it features a walk assist mode, which proves invaluable if you’re on the way back from the store with the bike laden down with groceries. It might seem like a little thing, but we found ourselves using walk assist frequently.

Credit should also go to the Infinity’s stopping power too, courtesy of Shimano Alfine hydraulic disc brakes on both wheels. The overall effect then is an e-bike that starts, goes and stops again without hassle.

Shimano’s handlebar-mounted computer is easy to use, both before you head off and while you’re on the move. It’s quick and easy to navigate and does things without fuss. It’s all well thought-out Japanese simplicity and compliments the overall experience with speed, distance, battery power and your chosen gear all displayed.

There are some neat touches to the Volt Infinity too, especially for people who live in countries with decent levels of rainfall. The full mudguards are invaluable, saving you, your clothes and shoes from getting a dousing on rain-drenched roads.

If you happen to head off road, not that the Infinity is an off-roader, then you’ll find it does function well on grass and soft trails. It’ll also fend off a bit of mud too. The Schwalbe tyres, though definitely of the road variety, actually seemed to deliver decent grip on wet grass.

Although Volt e-bikes have sizeable price tags the overall feel is certainly premium based on our short time with the Infinity. Volt has used quality components here, as witnessed by the tried-and-tested Shimano core running gear.

The Sony battery is reportedly good for 1,000 charge/discharge cycles and can be fully recharged in three to four hours. That’s fine for juicing up overnight if you’ve finished using it for the day, allowing it to be ready for the next commute or shopping trip.

Despite the valiant attempts to jazz up the Volt Infinity with a few subtle flourishes in the graphics department this e-bike does look a little understated. But that’s actually a good thing. Take some e-bikes into town and you’re soon being eyed-up by characters who can see the value in making off with your expensive new machine.

Rock up on the Volt Infinity though and you might remain unnoticed, which should hopefully mean you get to enjoy it for a lot longer than many e-bike owners.