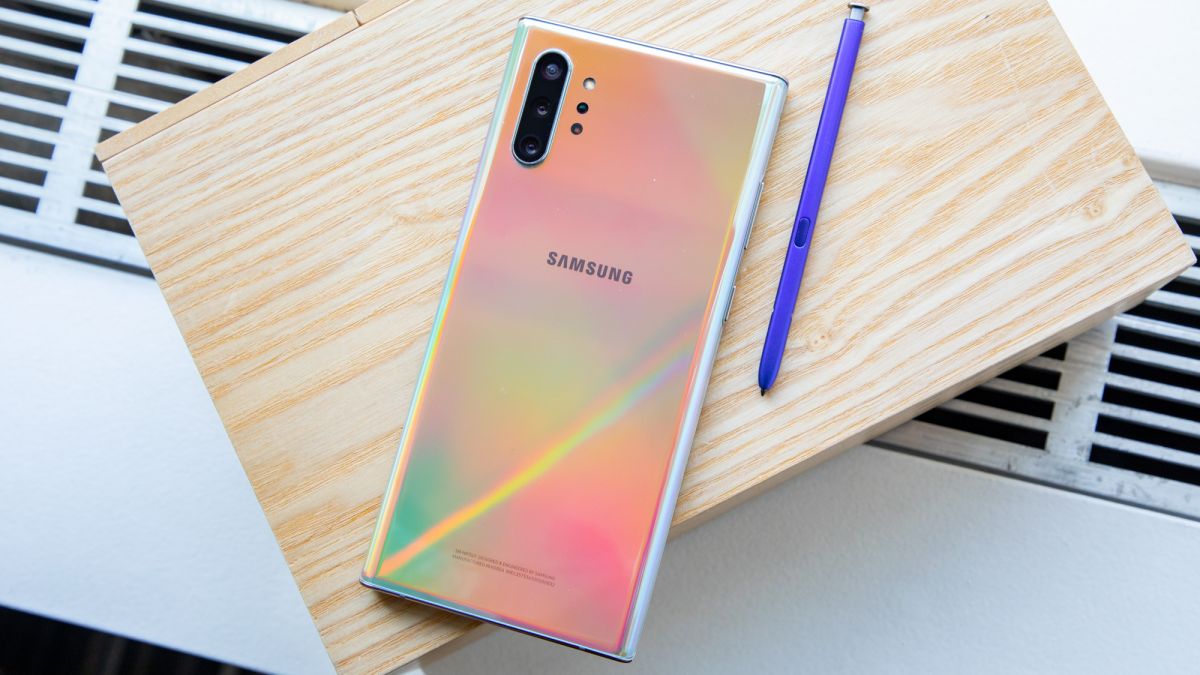 We’re expecting the Samsung Galaxy Note 11 release date for the end of 2020, months away as of writing, but with the launch of the Galaxy S20 phones it’s the next big device expected from the company.

The Samsung Galaxy S20, as well as the S20 Plus and S20 Ultra, constitute Samsung’s first flagship phones of the year, and we’d expect a lot of the tech shown off in them to come in the Galaxy Note 11, or Note 20, phones.

In January 2020 we also saw the Samsung Galaxy Note 10 Lite, a budget version of the Galaxy Note 10 from August that represented the first ever chance to pick up an S Pen stylus phone for cheap. Previously this was a privilege reserved for those willing splash out on a top-end device, but no longer – though only in the select regions (mostly Latin America) where the Note 10 Lite has launched.

So the potential existence of a Galaxy Note 11 Lite means Samsung has the opportunity to create a truly top-end phone, even more so than the leaked specs of the upcoming Galaxy S20 make it seem.

Bear in mind the Samsung Galaxy Note 11 might actually be the Galaxy Note 20, as we’ll get in to below, so if you see any news on the Note 11 it’s likely referring to the same Note 20 phone. We’ve gone for the former for now, until Samsung officially confirms its name change.

We haven’t seen many concrete Samsung Galaxy Note 11 leaks in the news yet – that usually occurs shortly after the flagship Galaxy S phone makes its debut. But we’re running with our expectations and have our finger on the update button once the rumor mill kicks into full gear.

We’d also like to see the usual improvements, like better camera, sharper screen, and so on. Those improvements are probably coming no matter what. (We also hope to see a stronger glass back in case we run into more, uh, accidents.) We’ve got a full list of our hopes and dreams later on.

Latest story: Despite wondering if the Note 11 will get a new chipset, a leak claims it will get the same Snapdragon 865 that debuted in the Samsung Galaxy S20 line of phones.

Given previous phones in the line came out in August or September of their year, we’re expecting the Samsung Galaxy Note 11 to be released in August 2020.

It’s likely that Samsung’s flagship phones will come with 5G capability across the whole range – the Snapdragon 865 chipset is expected to be at the heart of the almost all flagship Android phones, and Qualcomm’s new chipset is coupled with a 5G modem.

The Samsung Galaxy Note 11 release date is still half a year away, if the August 2020 launch window stays constant, so you should probably consider the discounted Galaxy Note 10 or Note 10 Plus if you need a new stylus phone in the next days, weeks or even months.

In an ordinary year, this is a long time to wait anyway – like, say, if you broke your phone and need a replacement ASAP – but it’s possible Apple’s launch date might be pushed back due to the coronavirus. We don’t know if the phone is far enough along in production that it will avoid these delays, but we’ll report it first here if we find out.

Since the 2019 Galaxy Note device was the Note 10, we were expecting the 2020 phone to be the Galaxy Note 11, but that might not actually be the case.

The phones we were expecting to be the Samsung Galaxy S11 devices are actually now set to be the S20 phones, and rumors suggest this change was done so the names of the phone match the years of the release.

If that’s the case, the Samsung Galaxy Note 20 could actually be the phone we see in late 2020, not the Note 11. We haven’t heard any news, leaks or rumors on the matter, but it gets gradually more likely every day.

It would be pretty odd for Samsung to skip the S11 but keep the Note 11, but for now all the S20 / Note 20 rumors are just that (albeit ones practically confirmed by Samsung). When there’s official word on the S20, we’ll start referring to the new Note as the Note 20 too.

There’s also a rumor that there might not even be a Note 11 – not in name, anyway. Samsung might combine both of its flagship lines into a single phone called the Galaxy One that would essentially be ‘an S-series with an S Pen’ according to reputable leaker Evan Blass.

The Samsung Galaxy Note 11 is still half a year away from being released, but there’s been a few potentially revealing leaks that give us a first look at the phone.

The phone will allegedly come with the same Snapdragon 865 chipset that debuted in the Galaxy S20 line – which makes sense, as they’re packed with the Snapdragon X55 modem to enable 5G connectivity.

Patents suggest the Note 11 might pack a spectrometer – a component that analyzes objects to discover its chemical composition. While it wouldn’t be the first phone to pack the device after the Changhong H2, as pointed out by LetsGoDigital, the Note 11 would be a phone with a much wider release.

The Note 11 could pack an in-screen front-facing camera, which would sit under the full display instead of within a notch or pin-hole, industry sources told South Korean tech site The Elec – and backed up by a tweet from notable leaker @UniverseIce.

Samsung will launch an under display camera phone next year！ not S11, not Fold 2October 17, 2019

Of course, some or all of these things could come in the Galaxy S20 first, since the S-series has often debuted new tech which that year’s Note entry inherits. Make sure to check out the Samsung Galaxy S11 page for all the rumors we’ve heard about features coming to that phone, like this one about a 5,000mAh battery and 108MP camera.

We’ve also heard that the Samsung Galaxy Note 20, as it was called in the leak, could have a 120Hz refresh rate screen that’s ‘more fine-tuned’ – although compared to what, we’re not totally sure. Maybe the Galaxy S20?

Either way, this could mean it’s less of a drain on battery, or has better automatic refresh rate detection. We’re not totally sure yet, and the tweeted message was rather cryptic.

There might only be 128GB storage in the Samsung Galaxy Note 20, at least in its smallest variant, and there wasn’t a device with this amount in the previous range. That suggests there could be a more budget-focused handset in the range, perhaps a phone that’s ‘Lite’ in all but name.

A Samsung patent won just after the Samsung Galaxy 20 launch shows a phone with a display that curves all the way to the rear of the body, but with physical buttons that protrude from the curves of the screen. Could this be the Galaxy Note 20? We’re not sure, as it could be a 2021 phone (or never materialize in reality), but we’d hope so.

Samsung Galaxy Note 11: what we want to see

Since we haven’t heard many rumors about the Note 11, we’ll speculate as to what we want to see – improvements on last year’s model and innovations we think would set the upcoming phone apart.

1. More capabilities in the S Pen

The S Pen has been the real selling point for the Note series – a stylus tucked neatly in the phone for those who hold a torch for Palm Pilot-style productivity. But aside from a couple of new capabilities introduced over the last couple years – a button that operates as a camera shutter, a few half-baked gestures – the S Pen remains primarily a writing implement.

Instead, we’d love to see the S Pen evolve into more of a proxy for the phone. If they can introduce one button, why not a couple more? It would be very handy to keep the phone in your pocket or perched for video and use the stylus to fiddle with volume and media navigation. Better yet, it would be great if the S Pen was used as a more universal remote across Samsung’s device family – maybe substituting a four-way joystick for the click-top so users can navigate. All we really know is the S Pen is not living up to its potential.

We’re big fans of the Samsung Galaxy S10e and the standard iPhone 11 for their value as budget flagships of their respective lines, and we’d love to see a more affordable version of the Note family. This isn’t a crazy idea – there already seems to be a Note 10 Lite in production, if this leak to is to be believed.

But if a Lite version of the last Note isn’t in the cards, getting one in for the next version would be a great opportunity not just to get the S Pen in more hands, but to play around with the Note design in general. Previous phones in the line are sleek yet wide phablets, but why not take a page out of the Google Pixel 4’s book and give the Lite/budget flagship version a funky look?

Like every year, we’re hoping the Note 11 gets improvements on its predecessor – most importantly in the cameras. And since they usually get similar if not identical lens suites as in that year’s Samsung Galaxy S-series, we can hope that the developments coming in the Galaxy S11 get ported to the Note 11.

So the rumor of a 108MP camera headed to the S11 Plus would be great to look forward to in the Note 11 – and in the same report, a 5,000mAh battery. Both are good improvements, and we’d love to see battery life extend to breach two full days, especially with the screen-intensive S Pen functionality.

One thing we pretty much know for sure: the Note 11 will get the same Snapdragon 865 chipset headed to all top-tier Android phones in 2020, which we recently got our hands on – and found it outperformed Apple’s A13 chipset that’s in the iPhone 11 line.

While the punch-hole is certainly a less obstructive upgrade from the notch, there are still compromises: we’d love to see a screen without any break whatsoever. That probably means an under-display window for the front-facing lens, which is something a leak actually suggests might happen.

The Note 11 might not end up being the first phone with this development, but given its status as the sleeker design-oriented flagship in Samsung’s lineup, we would like to see that big phablet display go seamless.

The Galaxy Note 10 5G cost far more than its 4G counterparts with only minor spec and camera upgrades, putting connectivity to the next-gen networks out of the hands of most folks. It would be great to see this cost shrink, full stop.

2020 probably won’t be the year that every flagship phone comes 5G-capable as a standard, but it’s going to be a lot harder to access if every 5G phone costs half again as much as its standard version. Given the Note line traditionally comes out toward the end of the year, though, Samsung could get ahead of the curve by trimming the price for a 5G Note 11 – and further differentiate it from the upcoming Galaxy S11.