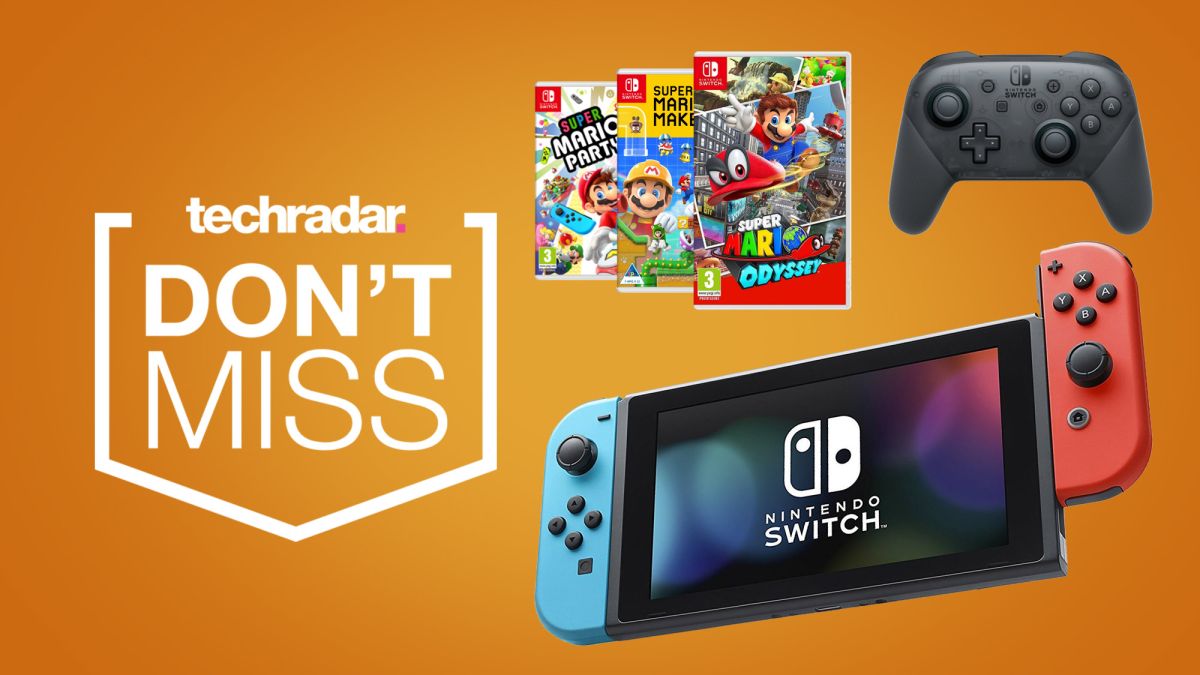 Mario Day may be over, but that’s not going to stop these Nintendo Switch deals from offering fantastic savings well into the weekend. We’re seeing some fantastic prices on Nintendo Switch bundles, cheap games, and both official and third-party controllers right now. That means there’s never been a better time to grab a new console or kit out your existing one.

With Nintendo Switch deals evading us at every turn over the last few weeks, the latest sales are even more welcome. We’re finally seeing some bundles that offer extra accessories or games in with the standard price of the Nintendo Switch console, and you can save on more top titles including Animal Crossing: New Horizons today.

Games include Super Mario Party, Super Mario Maker 2, and Mario & Sonic at the Olympic Games Tokyo 2020, each with their own savings. Plus, Best Buy is also offering this $64.99 Animal Crossing: New Horizons pre-order bundle. You can add to the savings with PowerA’s range of Nintendo Switch accessories, spanning retro-style controllers to sturdy carry cases with screen protectors included. Or, go official and grab some cheap Joy-Con for just $69, or a Nintendo Switch Pro Controller for $59.

But what about the main event? Well, you can also pick up this $299 Nintendo Switch bundle that throws in a PowerA controller absolutely free! Nintendo Switch bundles are in short supply in the US at the moment as retailers run in and out of stock faster than a golden mushroom so you might have to be quick to secure your savings today.

Those Mario Day sales are still going strong as we head into the weekend, so be sure to grab your Nintendo Switch deals soon!

Not in the US? You’ll find all the latest Nintendo Switch deals in your region further down the page.

Mario + Rabbids Kingdom Battle | $14.99 at Best Buy
This turn-based strategy has crashed in price over recent weeks, but you can find it especially cheap at Best Buy right now. The fantastic worlds of Mario and the Rabbids have collided and it’s up to you to journey through Mushroom Kingdom to put everything right. Think X-COM but with more adorable creatures to wage war against.
View Deal

Mario & Sonic at the Olympic Games: Tokyo 2020 | $35 at Walmart
Can’t wait for the Tokyo 2020? Mario teams up with Sonic in the latest instalment of the pair’s Olympic sports escapades. Perfect for multiplayer fun, this is a fantastic $25 reduction in Walmart’s Nintendo Switch deals.

Super Mario Party | $39.99 at Best Buy
Jump into minigame mayhem with Super Mario Party – the friendly cartoon virtual board game with the power to destroy friendships and familial ties. Plus, you can save $20 on all that carnage at Best Buy this week.
View Deal

Yoshi’s Crafted World | $39.99 at Walmart
Yoshi takes center stage once more in Crafted World, a paper-craft platformer filled with 3D space-bending puzzles and collectables. Control Yoshi through the cardboard world, collecting secrets and exploring the map – all for $20 less this week at Walmart.
View Deal

The Legend of Zelda: Breath of the Wild | $49.49 at Walmart
There’s a reason Breath of the Wild has rarely dropped in price despite releasing early in the Nintendo Switch’s lifetime. It’s truly one of the most amazing games released on the platform, and saving $10 on the physical copy is a fantastic opportunity.
View Deal

Super Mario Odyssey | $49.94 at Walmart
You can’t claim to have Mario Day sales without offering up the only flagship Mario game to his the Nintendo Switch. Super Mario Odyssey takes you through a series of unique worlds, each with their own challenges, secrets, and eccentricities as you – yep, you guessed it – save Princess Peach.
View Deal

PDP Wired Fight Pad Pro controller | $19.99 at Best Buy
Not only are you grabbing a cheap wired controller for your Nintendo Switch, but retro fans will love this GameCube design. Perfect for reliving those Smash Bros. days on the latest release, you’ll find this Nintendo Switch controller in a range of colors at Best Buy.
View Deal

PowerA Enhanced Wireless Controller | $34.99 at Walmart
Or, check out this bold red Nintendo Switch controller, featuring a silhouette of Mario straight down the middle. There’s also a mesh-like design over the entire body of this particular controller for extra intrigue.
View Deal

Nintendo Switch Joy-Con – Neon Pink & Green | $69 at Walmart
Grab this neon pink and green collection of Joy-Con and you’ll double your multiplayer capacity! Excellent if you’re a fan of Splatoon, these extra Joy-Con come in extremely handy for larger play sessions and making sure you always have a set charged.
View Deal

Nintendo Switch Joy-Con – Best Buy Exclusive Neon Green | $69.99 at Best Buy
If you like the look of the Neon Green Joy-Con below, but aren’t a fan of the pink sitting next to it, this Best Buy exclusive offering is also on sale for the same price this week.
View Deal

PowerA Stealth Case for Nintendo Switch | $9.99 at Walmart
This PowerA case offers up a fantastic retro design on a sturdy storage solution. Plus, you’re even picking up a screen protector and a microfiber cleaning cloth for full protection.
View Deal

PowerA Red Mario Nintendo Switch case | $9.99 at Walmart
You’re not saving much with this Nintendo Switch deal, but you are picking up an excellent PowerA case for under $10. That’s a great shout if you’re picking up a new console for Mario Day, so you can get protected straight away.
View Deal

Super Mario Bros. Snap Back Hat | $14.39 at Best Buy
You’ll find a massive range of snap back hats discounted in these Nintendo Switch deals, but this Super Mario Bros. edition is fully in the spirit of things. You’ll also find an excellent Legend of Zelda version for the same price.
View Deal

Super Mario apparel clothing sales at Walmart
From onesies to t-shirts, pyjamas to pants, Walmart has discounted its Mario apparel alongside its Nintendo Switch deals. With a massive range of kids, mens, and womens items on sale, you can kit out the whole family in the name of Mario Day.
View Deal