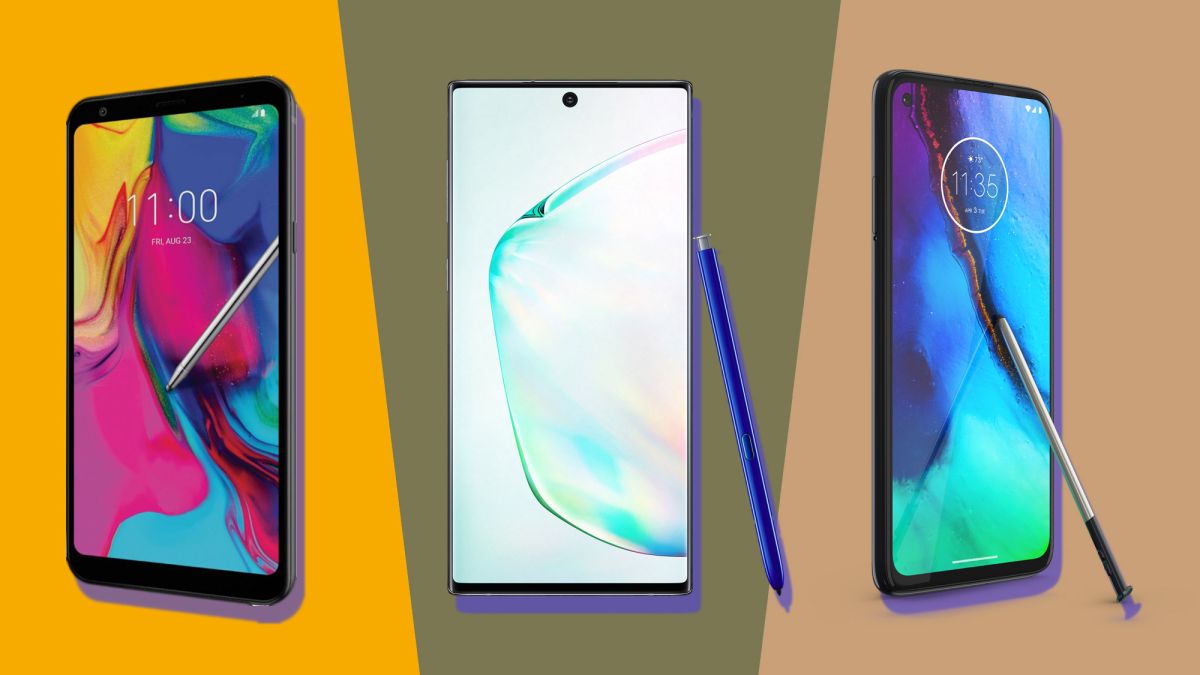 With the upcoming launch of the Moto G Stylus, it only becomes more apparent that there are very few phones on the market with styluses built into them for more precise inputs. As it stands, the frontrunners are LG’s ongoing line of stylus-packed phones, capped off by the LG Stylo 5, and Samsung’s Galaxy Note series most recently led by the Galaxy Note 10.

If you’re looking for a smartphone packing a stylus, your options are truly limited. So, we’re here to make sure it’s clear what is actually on offer by comparing the budget-friendly LG Stylo 5, the mid-tier Moto G Stylus, and the premium Galaxy Note 10.

This leaves the Moto G Stylus and LG Stylo 5 in a similar ballpark price-wise, but a $50 (about £40, AU$75) difference isn’t negligible on a tight budget.

The LG Stylo 5 shows its budget status in its design. It has the thickest bezels above and below the display. There’s no fancy glass black, and the single camera on the rear doesn’t stand out as much. That said, it does offer a touch of premium with its aluminum frame.

It also has thankfully kept with the times by opting for a USB-C port for charging instead of a micro USB port, which some budget handsets still feature. At 160mm tall and 77.7mm wide, it’s the largest of the three phones, but it’s not the thickest at 8.4mm and not the heaviest at 179 grams.

The Moto G Stylus steps things up on the design front. That’s thanks in large part to its extended display, which nearly does away with bezels altogether. Nearly. It does that with a hole-punch camera in the top left corner of the display. This phone also has a glass front and plastic back with an aluminum frame sandwiched between the two.

The rear has a little more flair with the column of camera sensors in the corner. Like the LG Stylo 5, the Moto G Stylus has a fingerprint sensor on the back of the phone. The chassis is the thickest of all three phones at 9.2m, and it’s the heaviest phone at 192 grams. It does at least offer splash resistance to keep water out.

The Galaxy Note 10 takes things to the premium levels. Unfortunately, following flagship phone trends, it’s the only one of these phones that doesn’t have a 3.5mm headphone jack. It has Gorilla Glass on both sides and an aluminum frame.

The Note 10 is also the only phone to offer serious water protection with an IP68 rating, making it capable of going 1.5 meters underwater for up to 30 minutes. It also hides its fingerprint sensor inside the screen, so you simply put your finger on the display to unlock.

Samsung goes the furthest with its reduction to bezels, offering a screen that covers more space on the front of the phone. This helps the Note 10 stay smaller than both the Moto and LG phone, and it’s even lighter.

Like the LG Stylo 5, the Moto G Stylus and Galaxy Note 10 both use a USB-C port., but the Galaxy Note 10 has a USB 3.1 connection enabling more functionality and fast data transfer over the connection.

All three phones include a stylus that slots into the bottom of the phone. The stylus for the Moto G Stylus and LG Stylo 5 is a simple, capacitive type that works just like a finger and requires no power.

Motorola’s stylus works much in the same way as that in the LG Stylo 5. The Moto G Stylus will automatically pop up some quick-launch apps when the stylus is pulled out. These include a sketch pad, a screenshot tool, and Google Keep. As with LG, you can also add other quick-launch apps.

The Galaxy Note 10’s stylus is powered, and automatically recharges when it’s inside the phone. That power enables pressure sensitivity and wireless capabilities like a remote camera shutter button, as well as gesture controls. You can also use it to take notes while the display is off.

While the Galaxy Note 10 might have the edge in terms of stylus functionality, the extra features aren’t exactly must-have. It is a more precise drawing implement than the styluses on the LG Stylo 5 and the Moto G Stylus, but that’s to be expected from the Note 10’s premium pricetag. The Moto G Stylus and LG Stylo 5 effectively tie in this category, as their stylus functionality is nearly identical.

All three phones are close to the same size when it comes to their displays. The LG Stylo 5 has a 6.2 inch display. The next largest is the Galaxy Note 10 with a 6.3-inch display, followed by the 6.4-inch display on the Moto G Stylus.

But, where they’re all fairly similar in terms of screen size and resolution, the Galaxy Note 10 dramatically sets itself apart when it comes to screen quality with Samsung’s signature flagship polish.

The Galaxy Note 10, meanwhile, has a Super AMOLED display. That gives it pure blacks that make for an incredible contrast ratio. It also can get incredibly bright, making it easy to see even outside on bright days. For video content, it can support HDR10+ playback as well. Of course, this is just a part of it being an ultra-premium smartphone and not a budget device.

This is where the three phones start to grow even further apart.

The LG Stylo 5’s budget status is apparent from the specs. It runs Android 9 Pie on a Snapdragon 450 octa-core chipset. It has 3GB of RAM and just a 32GB storage capacity. That can fortunately be expanded with a microSD card up to 2TB.

The Moto G Stylus steps that up in nearly every respect. It runs Android 10 on a Snapdragon 665 octa-core chipset with 4GB of RAM. It goes a lot further with 128GB of storage topped off with microSD support.

Naturally, the Galaxy Note 10 goes much further. It has a Snapdragon 855 octa-core chipset, or an Exynos 9825 depending on the market, which has dramatically faster speeds than its competition. It also gets 8GB of RAM to run on. While the Note 10 comes with Android 9 out of the box, an update to Android 10 is available.

The Note 10 also has 256GB of storage, though it lacks a microSD slot. It’s worth noting that the Note 10’s storage is also faster UFS 3.0, whereas the Moto and LG appear to have eMMC 5.1 according to GSMArena.

The phones differentiate on wireless connections as well. The LG and Moto connect to 802.11ac wireless, AKA Wi-Fi 5, while the Note 10 has made the shift to the newer Wi-Fi 6 and also offers NFC. LG doesn’t mention NFC in its specs, but the owner’s manual for the Stylo 5 suggests it, too, has NFC.

The Moto G Stylus has the largest battery of the bunch at 4,000mAh, and it supports 10W rapid charging. Both the LG Stylo 5 and Galaxy Note 10, meanwhile, have 3,500mAh batteries. However, the Note 10 supports 25W fast-charging, wireless charging, and even reverse wireless charging to deliver power to other phones and devices.

When it comes to cameras, the LG Stylo 5 starts to look a little hohum. It has a single, 13MP camera on the back – no flashy features like depth-sensing and no mention of stabilization. It only records 1080p video at 30fps. The front-facing camera is a 5MP wide-angle sensor, and it has the same video limitations.

The Moto G Stylus has a lot more on offer. The front-facing camera offers a 16MP resolution for sharp selfies, though it can also only record 1080p/30fps video. The rear gets more interesting with 4K/30fps video and electronic video stabilization. There’s also a combination of sensors from 48MP wide-angle camera to a 16MP ultra-wide and 2MP macro. This gives it much more versatility and decent quality in our experience.

The Galaxy Note 10 offers a triple camera sensor on the back as well. It has one 16MP ultra-wide sensor and a 12MP wide-angle sensor with a dual-aperture mode that can let in extra light. The third is a 12MP telephoto camera with a 2x optical zoom. With the exception of the ultra-wide camera, Samsung uses optical images stabilization.

Samsung also has more capability in terms of video with 4K/60fps, digital stabilization, and even HDR10+ recording. It also has slow-mo modes for up to 960fps at HD resolution of 240fps at 1080p. Its selfie camera offers a 10MP resolution and 4K/30fps video recording.

There’s little room to doubt that the Galaxy Note 10 is far and away the best of the stylus phones. It has more polish, more performance, and more capability. It’s even packed all of that into a smaller chassis.

But, it hasn’t done it at a small price, and that makes it a tough sell for anyone on some semblance of a budget. Carrier incentives can make it more affordable, though, so it may be worth seeing what Galaxy Note 10 deals are available.

When it comes to the two budget smartphones, the Moto G Stylus takes the lead in enough regards that we feel comfortable calling it the winner – though again, it’s not certain when that phone will be released.

Motorola’s polish on budget phones is commendable, as is its Android implementations, which avoid bloatware. The extra camera features and screen space are a big plus, and well worth the extra money. The LG Stylus 5 may have the lowest price, but it feels like it should be even cheaper given what it lacks in the face of Motorola.