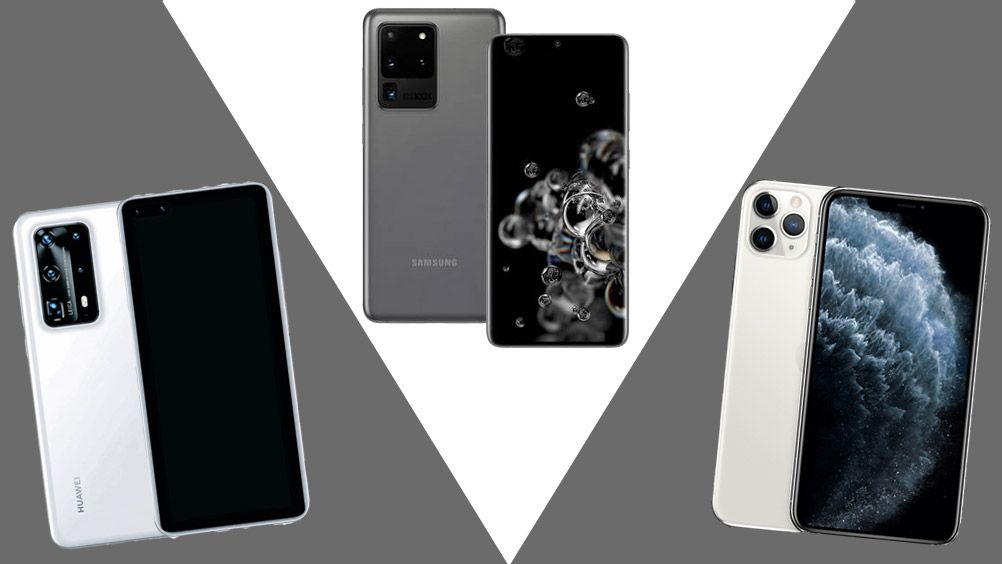 In late 2019 and early 2020, the three biggest smartphone makers put out phones that would rightly be classed as ‘super-premium’ handsets; Apple, Samsung and Huawei now all have luxury handsets packed full of top-end specs and impressive features.

The iPhone 11 Pro Max was the first, launched by Apple in September 2019 to top its iPhone 11 range. Although it has specs pretty similar to the iPhone 11 Pro, a few tweaks including a bigger screen make it Apple’s top-end device.

The Samsung Galaxy S20 Ultra came next, topping the Galaxy S20 series of phones released in February 2020. It’s even more premium than the Galaxy S20 Plus, with a huge display and some seriously impressive camera specs.

Finally, there’s the Huawei P40 Pro Plus, the top-end model of the Huawei P40 series, which takes the best features of the P40 Pro and builds on them, especially in terms of camera specs.

So how do these handsets stack up, which one is best for you, and which one is the best overall? We’ll run you through them so you can work that out for yourself.

If you’re a US phone fan, you’re going to have to rule out buying the Huawei P40 Pro Plus because Huawei phones generally don’t come to the country, and we wouldn’t expect that to be any different with this device.

The other two phones come in a variety of storage options and prices, but the storage they have in common is 512GB of storage, and depending on your region one or the other is more expensive.

If you know iPhones you know the iPhone 11 Pro Max design, as they don’t change that much – there’s a rather big notch and thick bezel on the front, but the back is pretty plain, other than an Apple logo.

This back has a matte glass design, which feels smooth and premium in the hand, and you can get it in green, gray, gold or silver versions. The iPhone is a big handset as despite being the smallest in terms of screen size, it isn’t in terms of actual body size, with dimensions of 158 x 77.8 x 8.1mm and a weight of 226g.

On the front this phone has rather slim bezels, a curved screen, and a punch-hole cut-out in the top center for the front-facing camera, then around the back there’s a huge camera bump to house the myriad lenses.

The Huawei phone has a similar front to the Samsung phone in that it has a curved screen, nearly no bezels, and a cut-out front camera, but this cut-out is much bigger than the S20 Ultra’s as it has two lenses, and it’s also on the left of the device rather than the center.

On the back there’s a camera bump to the top left which isn’t as big as the S20 Ultra’s, but is still pretty large.

While the Huawei P40 Pro Plus and Samsung Galaxy S20 Ultra have a USB-C port, the iPhone 11 Pro Max is dragging its heels with Apple’s own Lightning port.

If you can get over its large size, the Galaxy S20 Ultra has the highest resolution and best display of the three, and its 120Hz refresh rate helps with that. The Huawei P40 Pro Plus has a 90Hz screen but the iPhone is stuck on the ‘standard’ 60Hz.

Cameras are the true testing ground of these premium handsets.

Finally, the iPhone 11 has three 12MP snappers, specifically a f/1.8 main, f/2.0 telephoto (for 2x optical zoom), and f/2.4 ultra-wide. On paper this phone looks the worst, but there’s a lot more to camera capabilities than hardware.

Each phone has its own post-processing software that uses AI to tweak photos, which also enables specific modes on each like portrait and night shooting.

For example, while the iPhone only has 12MP sensors so won’t take as high-res pictures, the Galaxy S20’s 108MP snapper doesn’t work as well in low-light situations as the iPhone’s dedicated night mode, so one is not clearly better than the other and it’s hard to make sweeping statements.

We also haven’t tested the Huawei P40 Pro Plus, so it’s hard to say which camera is ‘better’ right now, but check out our list of the best camera phones to see which of the phones we’ve tested we think is best at any given time.

As for the front-facing cameras, the Huawei P40 Pro Plus has a 32MP one (paired with a depth sensor), the Samsung Galaxy S20 Ultra has a 40MP one, and the iPhone 11 Pro Max has a 12MP one.

In terms of battery sizes, the iPhone 11 Pro Max comes last with a 3,969mAh power pack, lower than the Huawei P40 Pro Plus’ 4,200mAh and Samsung Galaxy S20 Ultra’s 5,000mAh batteries. Due to the latter phone’s large size, though, it might burn through battery quite quickly.

The Samsung phone is also the fastest charger here, with 45W, which is faster than the Huawei’s 40W or the iPhone’s measly 18W. For wireless charging though, Huawei wins, as its phone also has 40W speeds for that, while the Galaxy only has 15W, and Apple hasn’t announced the iPhone’s wireless charging speed.

The Huawei and Samsung phones also have wireless power sharing, which lets you charge up other devices wirelessly on the handset. The P40 Pro Plus supports this at 27W while the Galaxy S20 Ultra only manages 9W.

Both the Huawei P40 Pro Plus and Samsung Galaxy S20 Ultra run Android 10 and have a 5G modem to give them the next generation of connectivity.

The P40 Pro Plus is powered by a Kirin 990 chipset and the S20 Ultra uses either a Snapdragon 865 or an Exynos 990 (depending on where you are in the world).

The iPhone 11 Pro Max is an iOS device on iOS 13, and it uses Apple’s A13 Bionic chipset, which seems to beat most Snapdragon scores in benchmark tests, despite it being a little older. It isn’t a 5G phone though.

RAM isn’t as good on the iPhone though, at only 4GB, compared to 8GB in the Huawei phone and either 12GB or 16GB in Samsung’s handset.

There are perks to both iOS and Android, and fans of one rarely change to the other, but there’s something worth remembering: the Huawei P40 Pro Plus doesn’t have Google Apps, including the Play Store. So you’re going to be stuck with the relatively few apps Huawei offers in its AppGallery.

It’s hard to say which phone is ‘best’, because it comes down to what you’re looking for in a handset. This is especially true when comparing the different operating systems, as people tend to be dedicated fans or naysayers; an iOS user might find Android a poor experience and vice versa.

Each phone has its benefits: the Samsung Galaxy S20 Ultra has a great screen, while the Huawei P40 Pro Plus has impressive camera hardware (at least on paper – we haven’t fully tested it yet) and the iPhone 11 Pro Max’s camera software is fantastic.

So depending on what you’re looking for in a handset, each of these may or may not scratch your itch. Well, that’s unless you’re looking for a phone that isn’t eye-wideningly expensive, but then you shouldn’t be looking at big-name flagships.