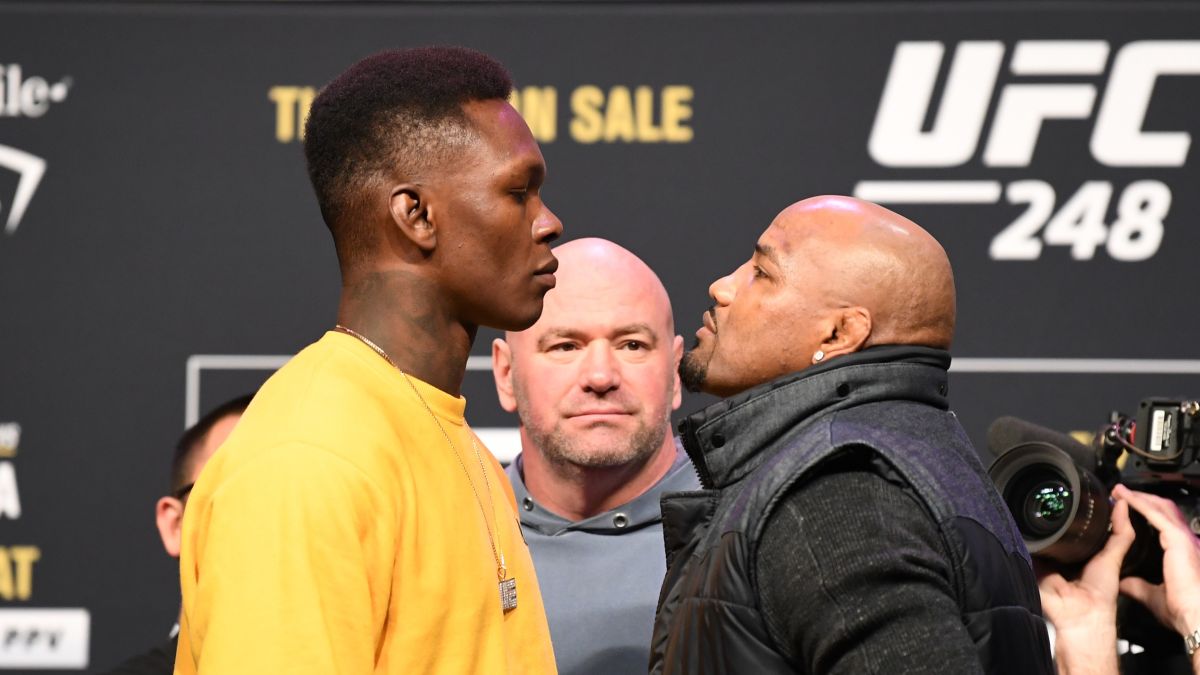 On a bill that features not one, but two championship bouts, the undoubted big draw on Saturday’s card in Las Vegas is the clash between undefeated middleweight champ Israel Adesanya and title challenger Yoel Romero – read on to find out how you can watch a UFC 248 live stream from anywhere in the world.

UFC 248 takes place at theT-Mobile Arena in Las Vegas. If you purely want to see the main card, the time to tune in is 10pm ET, 7pm PT and 3am GMT. For the prelims, you’ll need to crack your first beer at around 8pm ET, 5pm PT or 1am GMT for those in the UK. American readers ca ESPN+ is your place to watch tonight’s fight – read on to find out more about global UFC 248 live streaming options.

Adesanya, comes into Saturday’s fight with a formidable 18-0 win record. The 30-year-old Nigerian-New Zealander will be full of confidence following his emphatic victory over Robert Whittaker in his last octagon appearance back in October in Melbourne.

He now faces Cuban veteran Yoel Romero, a former Olympic wrestling silver medallist who is widely regarded as one of most athletic fighters to ever fight in UFC.

The 40-year-old has so far failed to hit the heights his skill set suggests he’s capable of, but this fight provides him with another opportunity to finally become a UFC title holder.

Adesanya’s ruthless dispatch of Whittaker was a feat that Romero wasn’t able to match in his two meetings against the Australian star, which may give some indication as to the likely outcome of Saturday’s showdown.

Regarded as one of best strikers in the sport, Adesanya is 10 years younger than his opponent and has a 6.5-inch reach advantage to boot.

So while the odds are not exactly in Romero’s favour, his notoriously strong chin coupled with his sheer power on the mat means he is more than capable of pulling off a shock –  so no self respecting fight fan will want to miss out on getting a UFC 248 live stream.

Need more reasons? The first title fight of the night sees Joanna Jedrzejczyk attempt to recapture the title she held for over two years with a tantalising clash against Chinese sensation Zhang Weili.

Ready to catch all of the action? Scroll down to find out everything you need to know about watching a UFC 248 live stream wherever you are in the world.

Live stream UFC 248 from outside your country

If you’re a big combat sports fan trying to catch the UFC 248 action but aren’t in the country you would normally watch the fights from, then you will likely find the coverage is geo-blocked. You can try using a VPN to change your IP address to a country where the fights are airing and watch this main card just as if you were back at home.

Virtual Private Networks are also handy if you’re concerned about streaming safely on the web, thanks to the encryption they use to hide your details. And the best won’t log your personal information, either. We’ve tested hundreds of VPNs and can recommend ExpressVPN as the very best VPN in the world.

That’s because ExpressVPN (which also comes with a 30 day money back guarantee) has proved itself as giving super fast connections, watertight security and is just really, really easy to download and use. You can watch on many devices at once including Smart TVs, Fire TV Stick, PC, Mac, iPhone, Android phone, iPads, tablets etc, too.

Plus, if you sign up to a year of ExpressVPN, you’ll get 3 months extra FREE and a rather tasty 49% off the usual monthly rate.

For any seasoned UFC viewers in the US, you’ll likely know that ESPN+ has the exclusive rights to all of the UFC fights around. That means it’s your one place to watch UFC 248.

Your options for watching the event depend on whether or not you have already dived in and bought a subscription to ESPN+. If you have, then the obvious way to go is with a UFC Bundle, costing you $84.98. While that might sound like a lot, that is not just getting you the UFC 248 PPV, but you’ll get a year-long subscription to ESPN+ (that would normally cost $50 alone).

On top of being able to stream tonight’s event. A subscription to ESPN+ also opens up access to over 20 exclusive live UFC Fight Nights, alongside original content including Dana White’s Contender Series, UFC Destined, and Ariel & The Bad Guy, plus classic fights, replays, and there’s also the perk of fewer adverts.

Those who have previously subscribed to ESPN+ will have to take a slightly different route. This will mean buying the PPV out right at a cost of $64.99.

You can tune in to watch all of the action including preliminary fights on Saturday, February 8 at 8pm ET / 5pm PT.

And don’t worry if you want to grab the pay-per-view but are going to be outside the US when it’s on. Just scroll down the page a little to discover how to use a VPN to watch a UFC 248 live stream from abroad.

BT Sport has the exclusive broadcast rights to UFC in the UK and Ireland. However, the good news for subscribers is that unlike some past UFC events, the card won’t be PPV, with all the action being shown at no extra cost on BT Sport 2.

The build up begins 11pm GMT with UFC Countdown, with coverage of the prelims beginning at 1am GMT.

As usual, the main card will start quite late/early in the UK at 3am so make sure you prepare accordingly. If that is a bit too late for you, don’t worry as BT Sport also offers a spoiler-free replay page which will allow you to watch the full UFC 248 card at your convenience.

Want to watch all the MMA action again? Well you can as the network will replay the headline fight on BT Sport 3 beginning at 10pm on Sunday night.

The network’s coverage of UFC 248 will also be available via the BT Sport app and on its website. And don’t forget that you can now get BT Sport without a massive commitment, thanks to the £25 Monthly Pass.

For anyone over in Australia, the place to head for your UFC 248 live stream is Main Event. You’ll have to fork out $54.95 to grab the PPV here but that gains you access to the entire event.

Coverage in Australia will begin on Sunday, March 8 at 2pm AEDT with a replay at 8pm and then every 6 hours from 6am, just in case you miss it on the night.

Fans based in New Zealand can catch this major MMA brawl over on Sky Arena. Similar to most other streaming platforms, you will have to pay for the PPV, costing $39.95.

The main card will kick off at 4pm but if you want to catch all of the action, early prelims start at 12.30pm. You can catch this main event at 4pm on the Sunday. However, Sky Arena does not include the prelims.

If you want to watch the entire event, you have two options. Either, you get a UFC Fight Pass. Or, you download a VPN and try and watch UFC 248 online from another countries streaming service.

UFC 248 card: Who is fighting tonight?

What does a UFC fan receive with their ESPN+ subscription?

Quite a lot, as it happens – a subscription to ESPN+ opens up access to over 20 exclusive live UFC Fight Nights, alongside original content including Dana White’s Contender Series, UFC Destined, and Ariel & The Bad Guy, plus classic fights, replays, and there’s also the perk of fewer adverts.