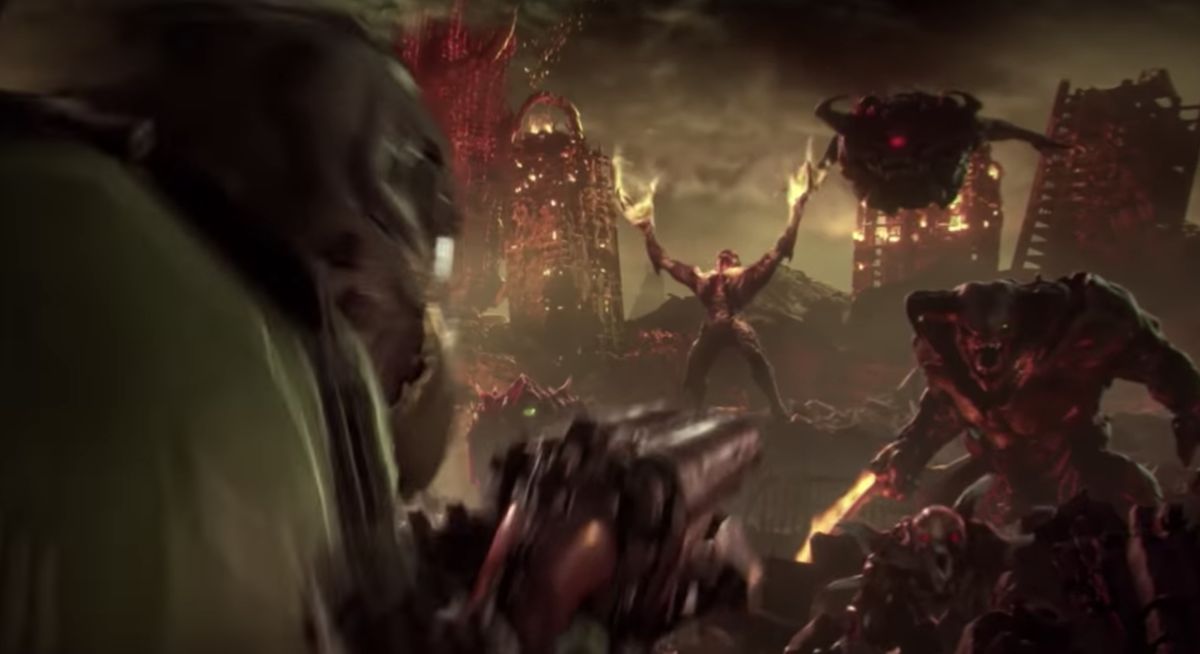 Just a day ago, we spotted some system requirements for Doom Eternal that were way higher than we expected. But they almost immediately got taken down, leading us to believe that they weren’t quite right – and, it turns out, they weren’t.

Official Doom Eternal system requirements have now been revealed on Bethesda’s blog, and they’re much more reasonable than the brief requirements that surfaced earlier. That earlier post suggested that you would need an Nvidia GeForce GTX 1060 at the minimum, along with 8GB of RAM and an Intel Core i5 processor.

But, luckily, you can get away with much more modest hardware. If you just want to run the game at 1080p and 60 fps, you can get away with an Nvidia GeForce GTX 1050 Ti or an AMD Radeon RX 470 – a much more accessible level of hardware. We listed out the full Doom Eternal system requirements below, but it’s a relief to know that more people can go to Hell (if they want to).

The only thing that really sticks out to us is the CPU requirements. For the recommended and the ‘Ultra-Nightmare’ settings, Bethesda and id Software give specific CPUs to aim for, which we’ll dive into more below, but for the minimum just has a clock speed as a target. This may not be super helpful for people looking to see if their CPU meets the minimum requirements or not, as “Intel Core i5 @ 3.3GHz” could theoretically go all the way back to the Intel Core i5 2500K, if it has a nice little overclock on it.

Either way, if you want to download the game early, you’re in luck. You can preload the game up to 48 hours before the game launches on PC, and it will unlock at 12:00 AM in your local time zone.

What kind of PC do you need to run Doom Eternal?

The Doom Eternal system requirements are kind of all over the place, and it’s hard to nail down the perfect system to play the game. Now, we obviously haven’t got our hands to test performance like we have with Red Dead Redemption 2 or Halo: Reach – yet – but we can get a pretty good idea of the right kind of hardware to run the game.

Because the game at a minimum requires an Intel Core i5 or AMD Ryzen 3 at 3.5 GHz or 3.1GHz, respectively, we can safely assume that the game isn’t heavily threaded. For instance, the AMD Ryzen 3 1300X has a 3.5GHz base clock and just 4 single-threaded cores. That means that even old quad-core champs like the Intel Core i5-3570K should theoretically be fine. But, again, IPC (instructions per clock) performance has come a long way since either of these processors launched, so you can’t be 100% sure.

Things get a little more confusing when you go up to the Ultra-Nightmare specs. It calls for an Intel Core i9-9900K or an AMD Ryzen 7 3700X, which may both be 8-core, 16-thread processors, but perform very differently. Intel’s processor has stronger single-core performance, thanks to its high 5 GHz boost clock, whereas the Zen 2-based 3700X smokes it in heavily threaded workloads (at a cheaper price).

The confusion continues when you look at the GPU requirements for this level, too, as it calls for either an Nvidia GeForce RTX 2080 Ti or an AMD Radeon VII – two GPUs that are definitely not on equal footing.

At the end of the day, we won’t actually know what performance will look like for Doom Eternal until we’re able to actually run it through some testing ourselves, but for now we can help you make sure your system is up to date, using currently-available PC components.

If you just want to play at 1080p with high settings, this is the system we recommend:

However, if you want to really embrace everything this game has to offer, soaking in the high-fidelity graphics, we recommend the following hardware:

Then again, it’s entirely possible that Doom Eternal is going to be a huge VRAM drain, necessitating the 11GB of GDDR6 on the RTX 2080 Ti or the 16GB of HBM2 on the Radeon VII – but we seriously doubt it.

If you need to make an upgrade your hardware to play Doom Eternal when it hits the street, we went ahead and included convenient price comparison widgets down below so you can find the best price on admittedly expensive PC hardware.