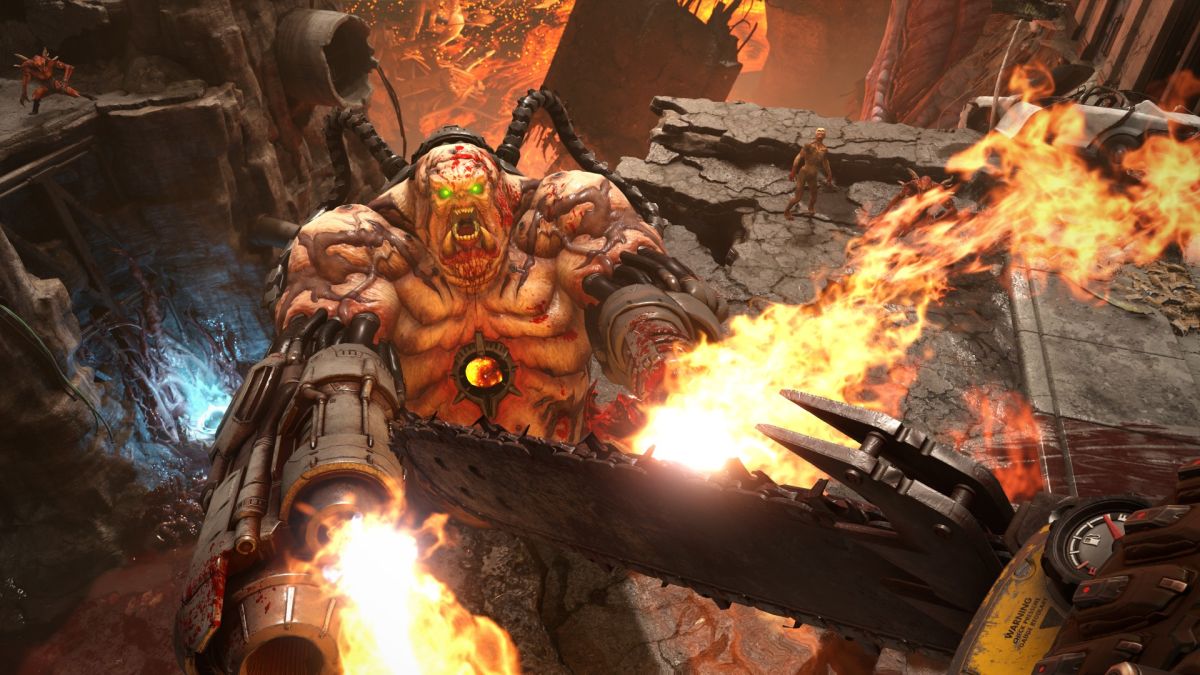 Doom Eternal is the latest instalment in the iconic first person shooter game series, and now that it’s launched, we couldn’t wait to try it out in 8K on our specially-built gaming rig, which features the most powerful consumer graphics card in the world: the Nvidia RTX Titan.

We’d already found that even though Doom Eternal looks fantastic, it manages to run extremely well on a wide range of graphics cards at 4K, but running at 7,680 × 4,320 8K resolution is a whole other level of pain for even the most powerful of gaming PCs.

However, the good news is that Doom Eternal plays impressively well at 8K, easily surpassing our expectations. However, that 8K performance comes at a very high price, both in terms of cash and frame rates.

So, let’s get right to it: how does Doom Eternal run at 8K resolution? We’re pleased to say, pretty damn well, all things considered.

Playing Doom Eternal at 8K resolution and with graphics settings on ‘Ultra Nightmare’, which is the highest they will go, gave us average frame rates of 39.9 frames per second (FPS).

As we mentioned in our in-depth Doom Eternal GPU tests, the game doesn’t have a built-in benchmark tool. Instead, we used MSI Afterburner to record the frame rates as we played. These results cover around 15 minutes of gameplay at the start of the game, and include tight corridors, large rooms filled with enemies and wide open spaces as well.

Managing almost 40FPS in ultra settings at resolutions of 7,680 × 4,320 is very impressive, however it’s a far cry from the 60FPS minimum most PC gamers expect these days. Plus, if you have a monitor with a high refresh rate, where you usually expect frame rates easily above 100FPS, that 40FPS frame rate isn’t going to impress you much.

It’s also worth noting that Doom Eternal is a frantic, fast-paced game that’s been designed to feel quick and responsive, so having average frame rates of 40FPS (and we recorded minimum frame rates of 18FPS), means you’re not going to get the full experience playing at 8K, not matter how good it looks.

Of course, we were playing at the highest graphical settings, so if you spent a bit of time tweaking the graphics, you could boost that framerate higher. However, that leads us on to our other issue with Doom Eternal at 8K…

A monster GPU for monster slaying

So, is playing Doom Eternal at 8K worth it? No, not at all. Sure, you get bragging rights, but this is a game that places emphasis on speed, FPS and lightning-fast responses, things that are all sacrificed if you play at 8K.

And, while this game certainly looks nice in places, it’s not meant to be a graphical showcase. Because hardly anyone will be playing the game at 8K, the textures aren’t designed for those resolutions. So, when playing at 7,680 × 4,320, you’re getting a hit to the performance without the corresponding bump in graphical fidelity.

Dropping the resolution to 4K, then, gives you a much better return on your investment. In fact, in our tests we found that the Nvidia GeForce RTX 2060 Super, a GPU that’s a fifth of the price of the RTX Titan, can manage 4K at 60FPS.

8K gaming: not ready for prime time, but getting there

So, Doom Eternal’s 8K performance is a mixed bag. On the one hand, the fact it’s getting over 30FPS (frame rates many people consider the absolute minimum for a playable game) at 8K is impressive.

We tried Gears 5 and Red Dead Redemption 2 at 8K resolutions, and both of those  games struggled to run at anything approaching a playable frame rate at 8K, despite the powerful (and very expensive) hardware they were running on.

This is testament to the devs over at iD Software, and the Vulkan API, Doom Eternal uses. This makes the game a brilliant PC port, with performance that easily beats the PS4 Pro and Xbox One X, even on cheaper gaming PCs.

And, while 8K gaming at 60FPS seems a while away yet (unless you’re playing old games like Halo: Combat Evolved, which we got running at a rock-solid [email protected]), Doom Eternal proves that playable 8K gaming is possible right now for modern games – as long as you have the budget.

However, if you want to play Doom Eternal at 4K and 60FPS, which we think offers the best experience, check out our picks of the best hardware below: