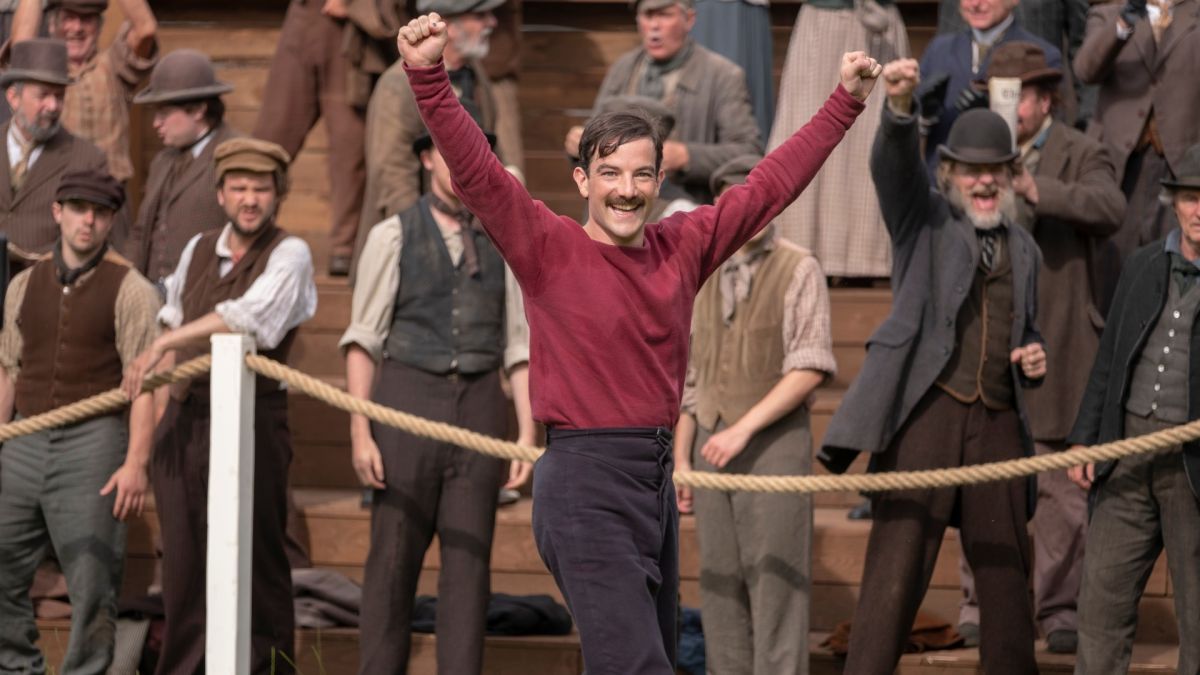 In extraordinary, unprecedented circumstances, my strict Saturday routine is forcibly changed on March 14, 2020. Usually, at 3pm sharp, I’d be tuning in to follow the ups and – more often than not – downs of my club’s chase for promotion from the third tier of English football. Today, however, Portsmouth won’t host Accrington Stanley at Fratton Park. My afternoon is an open goal, as will will be the rest of them for the foreseeable future: football across the United Kingdom has been suspended due to the coronavirus.

After as little as two hours into my football-free time I anxiously twiddle my thumbs and, like many others, look for ways to fill the gap. FIFA and Football Manager are fun, but no replacement for the real thing. To give you an idea of how desperate people like me get for any kind of competition, Southampton FC played Manchester City on Twitter, at noughts and crosses.

So Julian Fellowes’ The English Game arrived on Netflix at the best possible time. The drama from the writer best known for Downton Abbey traces the origins of football in the late 19th century. It ticks the only box I need in this trying time: it has football in it, at least an impression of it. But does it offer anything valuable for a sports fan in their time of need?

Well, no. The English Game sees Fergus Suter (Kevin Guthrie) travel from their Glaswegian home to the Lancashire town of Darwen to play professional football and win the FA Cup, the oldest national football competition in the world, for the working man. The trouble is, in 1879, being paid to play is forbidden by competition rules, in this amateur-only sport devised by gentlemen in the playing fields of elite British public schools.

Its premise isn’t half bad and the familiar shouts from the sidelines, of 22 pairs of boots pounding the turf, are a reassuringly warm blanket at first. The clichés are comforting – “Let the ball do the work,” Suter implores his fellow Lancastrians in his first match – and captain of the Old Etonians, Arthur Kinnaird (Edward Holcroft) even looks a bit like Chelsea forward Olivier Giroud, if you squint.

But this is a world away from the sport I know, and that’s not because midfielders are ‘half-backs’ or that players swarm around the ball instead of occupying space, charging towards their target almost like a wedge formation. I didn’t previously know that teams with five or six forwards in this time could be defensive, but this isn’t football, whatever the century.

It’s hard to put into words how terrible The English Game’s on-pitch action is. I tried to suspend my disbelief, to forget that these are actors pretending to play football, but they sought to doggedly remind me of that fact at every opportunity. Obviously fake tackles and half-arsed attempts at saves are as heavy and laboured as the bright boiled leather ball with which they’re ‘playing’. “Jimmy would’ve got to that,” Fergie thinks to himself as he punts a ball directly into a hedge.

It’s somehow made worse by this weird, guttural chanting during matches. It also materialises during supposedly tense scenes off the pitch to indicate that we should be feeling something. Seriously, two football clubs tactically placing their crests inside a three-by-three grid is closer to the beautiful game than this.

Away from the field is hardly any better with wooden acting, lazy stereotypes of working Northerners from down t’mill pit against cold, corrupt elites, and one of the worst scripts I’ve ever endured on Netflix. “On the football field you’re a genius,” Fergie is told before a match, “away from it you’re a puzzle.” Suter plays football for money and then moves to another club for more money. What an enigma.

But the ridiculous melodrama of The English Game’s subplots are so bad they make me long for a return to the pitch. The actual football is almost entirely absent during the show’s middle episodes preoccupied with problematic class politics, affairs, and… actually the less said on that the better.

At one stage Darwen players are shocked when its impoverished population pay to support them. But if “people need football,” as hirsute manager James Walsh (Craig Parkinson) explains, why is it relegated to the background as if it were an inconvenience? Then, occasionally, I’m reminded of what football is like in The English Game and regret my question.

Instead we follow relationships and character arcs that are somehow both under-developed and dwelled on for too long. After five minutes in Darwen, Suter has already made friends for life there, apparently, and the kindly Kinnaird almost immediately transforms from odious posho to saccharine saviour of the working man.

Admittedly there is something interesting buried beneath all the rubbish. It’s ham-fisted and heavy-handed, but the show is bookended by attempts to ask the vexed question of who football is for. Is it for the rich who play for fun, or the working poor that cobble together what little they have each week to support their adopted mercenary heroes?

It isn’t long before the gentlemen amateurs start to lose their grip on the pastime they invented as working class professionals threaten to beat them at their own game. The line “Football is a game, not a business,” may be intoned with trademark awkwardness and scenery chewing, but it’s hard not to reflect on the dark side and dominance of money in today’s game as clubs take ever greater risks to have a swipe at the English Premier League, and the lucrative TV money that entails.

While The English Game momentarily encourages football fans like me to reflect on the origins of the game and how it could’ve all been so different, it’s still just awful. Yet I binged it all in one go anyway, and I hate myself for it. On reflection, I’d sooner watch a game of tic-tac-toe on Twitter.